Apple squeezes the reception out of Nokia N97 mini

Apple seem keen to prove other smartphones have the same reception attenuation as the iPhone 4. And they are getting back with a video of Nokia N97 mini that suffers from the same grip of death as the iPhone.

Back at Apple Antennagate press conference last week Apple failed to show a faulty Nokia handset (probably because Nokia has a smaller smartphone market share in the US), but nonetheless Nokia came forward with a statement on the matter last weekend. 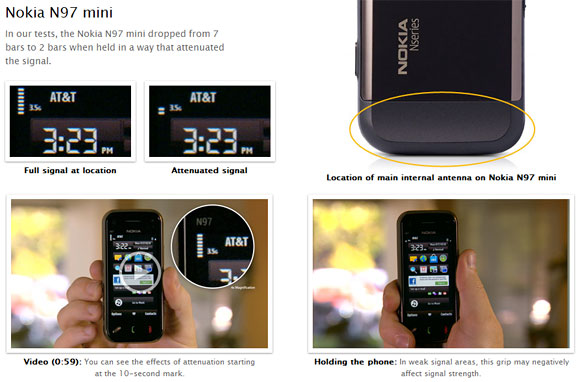 So Apple is keen to strike back at Nokia and the N97 mini is the next victim of Apple's accusations.

As the following video reveals, the S60-based smartphone loses signal if you cover its antenna with a hand. As a result, the N97 mini drops from 7 to only 2 bars. The question remains though - would that drop be bad enough to cause a dropped call as it is on the iPhone 4?

It's not even funny anymore. Who's next? Motorola? Sony Ericsson? We'll see. Stay tuned.

Nokia N97 mini i love it