Apple posted its financial results for the Q3 of the year (and Q4 of its fiscal year). The highlight of the report is the revenue of $62.9 billion, over 20% increase on a yearly basis.

In Q4 2018 Apple sold 46.8 million iPhones and nearly 10 million iPads, both numbers almost exactly matching what it achieved this time last year. The revenue from the iPhones was significantly higher, though, due to the increase in the average selling price.

Services like Digital Content, AppleCare and Apple Pay brought in close to 10 billion in revenue, their best ever performance for a three-month period. It is a 5% jump quarter-to-quarter and an impressive 17% increase from Q4 2017.

The income between July and September was $14.125 billion, over 30% increase, compared to the same quarter last year. 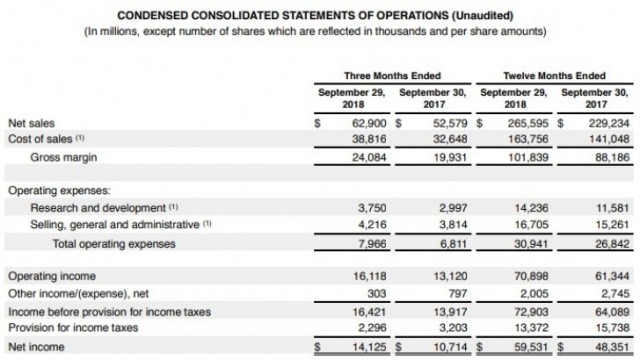 I do actually work in a phone shop why would I make that up? What's vr got to do with anything. Vr is rubbish on mobile phones regardless of resolution. Maybe in few years when technology improves. One of best things to look for when spotting pi...

If you actually worked in phone shop then you would not say that I am making stuff up. The XR screen is far from top notch. Deal with it. Even on S9 you can see pixels when you move close enough. One question, does the XR support VR? That should ...

Nonsense ur just making cr@p up! U can't see the pixels when u move it close to ur face :D It isn't a 320p screen where u notice pixels. I work in phoneshop. We got xr on display and I had a check and it's crystal clear when close up. A mobile p...