Apple has surpassed Xiaomi to become the top smartphone vendor in China, according to the latest report from market research firm IDC. 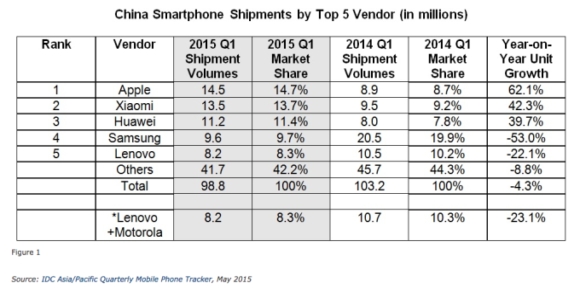 As per the report, the Cupertino-based tech giant shipped a total of 14.5 million units last quarter, capturing a 14.7% market share. This compares to the 13.5 million devices shipped by the five-year-old Chinese company, which translates into 13.7% market share. Huawei, Samsung, and Lenovo rounded up the top five with 11.4, 9.7, and 8.3% shares, respectively.

In addition, the report also revealed that China's smartphone market, which is the largest in the world, saw 98.8 million units shipped in the quarter, which is a 4% year-on-year decrease. Notably, this is the first time since 2009 that the country's smartphone market has witnessed a decline.

"Smartphones are becoming increasingly saturated in China,” said Kitty Fok, Managing Director at IDC China. “China is oftentimes thought of as an emerging market but the reality is that the vast majority of phones sold in China today are smartphones, similar to other mature markets like the US, UK, Australia, and Japan. Just like these markets, convincing existing users as well as feature phone users to upgrade to new smartphones will now be the key to further growth in the China market.”

This is horrible. Apple is linked with US government.

Tough competition between 4 top Chinese Manufacturing companies. Lol.... Whichever you buy, it's the same thing inside (Manufactured by Chinese Company)