Supported system languages now include several European ones, East Asian ones and Arabic. In addition to that, right-to-left UI mode is now supported.

Siri can now understand Arabic (Saudi Arabia and United Arab Emirates). Dictation-only support is added for a number of other languages.

For time-keeping, a new complication is available for the Islamic and Hebrew Calendars. Here's the full changelog. 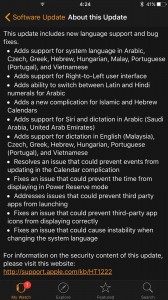 You can read about some additional security improvements here.

With software update, you can optimize your software or apps so you can reach longer battery life. Keywords : "Software Optimization".

Seriously you needs to ask that question!!! 😊

How can a software update make a device, already made, water resistant or a longer battery?