Apple usually does not provide detailed specs of its mobile devices and this was the case with the brand new Apple Watch Series 7. Thankfully an internal document straight from Apple itself managed to leak out on Twitter via user @alixrezax giving us out most comprehensive spec list of the brand new Watch 7.

The specs of the latest Apple smartwatch are also shown next to the older Series 6, Series 3 and SE models. 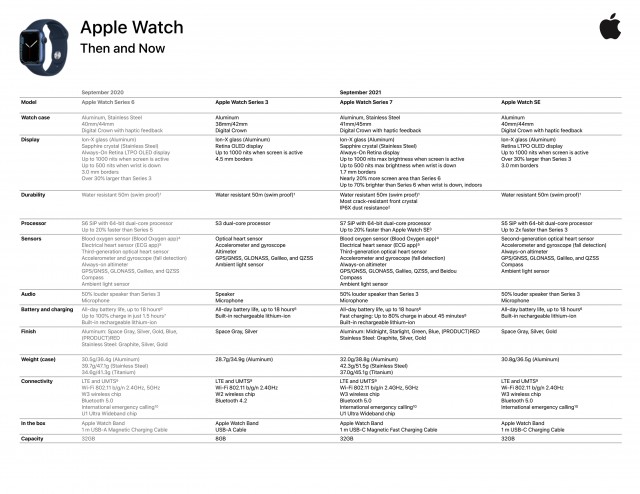 Perhaps the most notable bit of info is the weight of the different Watch Series 7 models. The 41mm sized models weighs in at 32 grams with the Aluminum casing, 42.3 grams with the Stainless Steel one and 37 grams with the Titanium build. The larger 45mm models come in at 38.8 grams (Aluminum), 51.5 grams (Stainless Steel) and 45.1 grams (Titanium) respectively.

We also get confirmation on the chipset naming for the new Watch 7 series – the S7 System-in-Package (SiP) which is claimed to be 20% faster than the S5 SiP on last year’s Apple Watch SE. Internal storage on all new Series 7 Apple Watches (including the Nike models) is 32GB which matches the SE and Series 6 models.

I don't think any of them realize how important the battery life is to the user, as huawei offers 21Samsung's watches have a battery of 15 days when they're not tied up constantly with bluetooth and GPS, it's boring when the wa...

I always charge my Apple Watch 5 in the morning. I only charge it up to 85% and it lasts me till next morning with around 20% left.

the battery dies every evening or night. since you put the watch to charger before sleep (just like the phone), it stays in the dock all night till you wake up the next morning. it has to last at least 4-5 days to cycle several days and nights and co...