Apple's iOS 8.3 is now out for all supported devices

After a few betas for developers and a couple of public beta releases for consumers, iOS 8.3 has been finalized by Apple. The new software version is now in the process of rolling out to all supported mobile devices.

iOS 8.3 brings with it a very large number of bug fixes, but also some new features. Among these is a new emoji picker, new diversified emoji, wireless CarPlay support, two-factor authentication for Google accounts, and Apple Pay functionality enabled for the China UnionPay network. 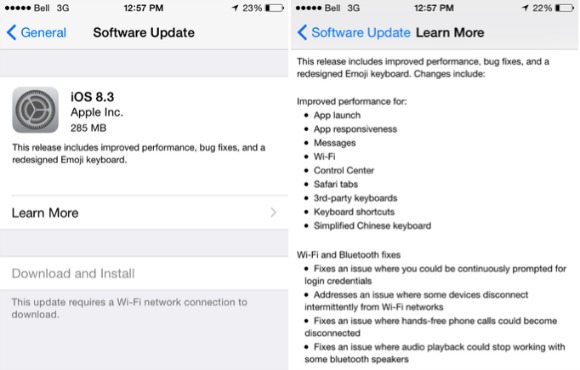 A few apps have received minor updates too, for example Passbook, Messages, and Photos. Siri got new languages and the ability to make calls via the speakerphone. You can now download free apps without having to enter your Apple password.

Previously, iOS 8.1 brought support for Apple Pay, and iOS 8.2 incorporated all the bits necessary for the mobile OS to work with the Apple Watch. An update to iOS 8.4 could already be in the works, perhaps including Apple's upcoming streaming music service.

Bro does it really work?!!

is ios 8.3 compatible with ipad 2? sorry for wrong gammar

I've experienced a lag and freezing with both my iPhone 4s and my wife's, a user commented bout the call dropping and I would like to reassure you that it is happening with our iPhone 4s mobiles as well, note to self it is an iPhone 4s and not an iPh...