Earlier this year ARM unveiled its next-generation GPU architecture called Valhall, debuting on the Mali-G77 GPU – a flagship part expected to show up in chipsets next year. Today, the company unveiled a mid-range part based on the same architecture.

Also, ARM unveiled a new lineup of NPUs under the Ethos brand name. Those will power the computational photography, on-device translation and much more AI-based work in future devices.

The ARM Mali-G57 GPU targets mid-range chipset and promises a 30% boost in performance, energy efficiency and silicon density compared to a Mali-G52. The texture performance is doubled, which will help with rendering high resolution UIs in 4K and even 8K (ARM is obviously looking to put the G57 in smart TVs and set top boxes, not just phones). 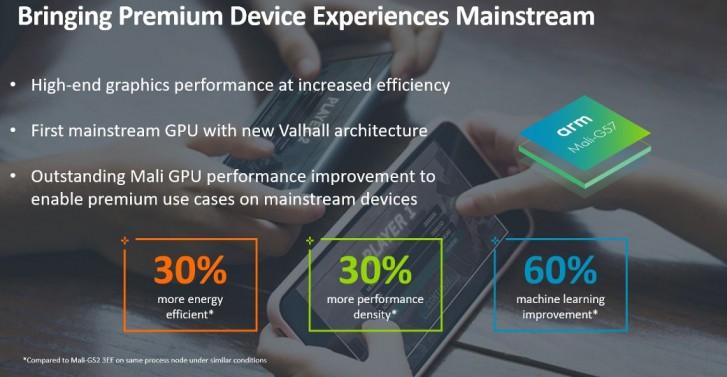 With the extra oomph, the GPU can handle physically based rendering, HDR and volumetric effects. Just how much oomph you get depends on the chipset designers – the Mali-G57 can be configured with anywhere from 1 to 6 cores. On the upper end, it approaches the basic G77 (which has at least 7 cores).

The GPU can handle AR and VR applications. While phone VR may be dead, this GPU may find its way in stand-alone headsets. It supports foveated rendering to lighten the computational load. For AR (which seems to be rising in popularity), the GPU promises to enable support on more affordable devices.

The Mali-G57 can be used for machine learning too. In this task it’s up to 60% faster than the old G52 thanks to double the FMA modules. However, such tasks will ideally be handed off to one of the Ethos cores.

Ethos is ARM’s new lineup of NPUs. They are based on the same Computation Engines (CE), but pack a different number of them running at up to 1GHz. These have different amounts of SRAM as well. Ethos is intended to cover everything from entry-level smartphones to flagships, from smart cameras to AR applications.

The top NPU, the Ethos-N77, contains 16 CEs and 1-4MB of SRAM. It can reach 4 TOPS at 1GHz – Terra Operations per Second instead of FLOPS as they aren’t always floating point calculations. In terms of power efficiency, the N77 promises 5 TOPS/W, meaning it consumes around 800mW at full tilt. 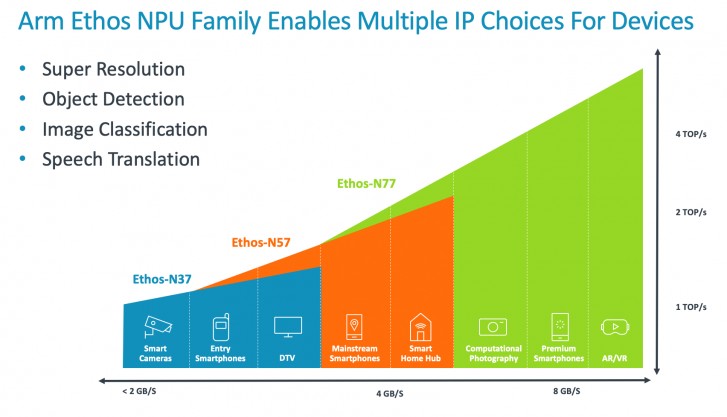 The Ethos-N57 and N37 have 8 and 4 CEs, respectively. Both have 512KB of SRAM. This doesn't sound like much, but ARM has implemented a lossless compression, which minimizes RAM and bandwidth requirements by 1.5-3x.

The Ethos cores can run algorithms for Super Resolution and speech translation without having to lean on cloud computation.

ARM also unveiled the Mali-D37 – an entry level DPU. It can handle up to QHD+ resolution (1,440 x 2,880px) on a smartphone, but has additional optimizations for 1080p devices. It supports HDR10 and HLG, as well as mixing HDR and SDR content without losing quality (e.g. the UI can be rendered in SDR and a video stream in HDR).

Wow, ARM is covering even more areas! This could help smaller SoC manufacturers to just implement whatever ARM has designed instead of doing on their own from the ground up.

Its something in the lines of "display processing unit".