ARM unveils Mali-G71: new architecture with an eye on VR

Here's a side of GPU to go with that new Cortex-A73 processor. The Mali-G71 makes the transition to a new architecture, Bifrost (the T880 it replaces and all the way to T6xx used Midgard, used as early as 2012 for the Nexus 10).

The G71 focuses on two things - Vulkan and VR. Vulkan is the new graphics API, which aims to provide high performance on both desktops and mobiles.

For VR, the new GPU supports the multiview API, essentially a fast, standardized way to render the scene twice - once for each eye. Since the difference in what each eye sees is small, there's plenty of room for optimization. Latency is also a huge concern, so front buffering is supported - a way to send graphics data to the VR headset faster than the double-buffering used for traditional displays. Double-buffering is nice since it prevents screen tear, but it also means the screen is a frame behind.

The Mali-G71 promises a 20% power reduction under the same load as the T880. It will be faster too - "40% better performance density." As with the Cortex-A73, ARM is trying to make high performance more easily accessible by making chips smaller. That's what "performance density" means - same performance can be achieved in smaller (thus cheaper) chips.

The G71 is highly scalable too. It can be configured with up to 32 shader cores (up from 16 cores for the T880), so for devices that have the power and cooling capacity, a Mali-G71 can offer tons of performance. 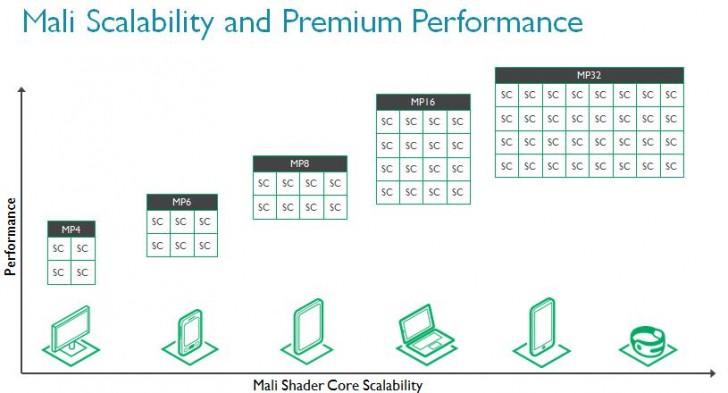 Devices with a G71 GPU are expected early next year and by then 4K displays will become much more common (especially in VR) so all that performance will be put to good use.

Hit the source link for more in-depth explanation of the improvements in Mali-G71 and Bifrost.

ARM is a set of instructions and not a brand of products. The main brand in GPU is Adreno from Qualcomm and PowerVR.

Time sure flies by and Midgard is no more. Not sure how i feel about the 32 shader cores support but majority of ARM GPU in SoCs are still stuck in 2-4 config (except Tegra, Exynos 5420 and up, and mid to high-end Snapdragon SoCs) Shader ...