The Asus Padfone 2 actually ships in two separate boxes, one for each piece of the hybrid device. There isn't a whole lot of extra accessories though, you just get the usual stuff - a pair of headphones, an AC adapter with a full-sized USB port and the company's proprietary 13-pin cable. There's also a small tool for opening the SIM tray.

At 137.9 x 68.9 x 9 mm, the Asus Padfone 2 is pretty compact for a 4.7" smartphone. It's about as wide as the LG Optimus 4, and even though it is notably taller, it's actually still pretty comfortable to carry.

At 135g, the Asus flagship also strikes a good balance between portability and solid feel. The docking station brings the overall weight to 649g, which is not the best in the 10" tablet realm, but still reasonable.

Asus Padfone 2 sized up against the Nexus 4

The Asus Padfone 2 design takes after the company's Zenbooks with the concentric circles at the back, and we have to admit we really like the result. The phone is stylish without being overdesigned, with the unique profile and the pattern at the back bringing personality.

The plastic used reminds us of the Samsung Galaxy S II, which to this day remains one of the most stylish handsets. Asus however added its unique twist with the silver frame around the sides and some cool touches to the front panel.

The only aspect of the Padfone 2's looks that we are not particularly thrilled about are the large bezels above and below the screen and the unexplainable gaps in the framing on both sides of the phone towards the bottom. It's the point where the two bits meet - but fail to align - which looks like poor craftsmanship, rather than a design accent.

The misalignment of the frame pieces on the sides

Still, even with those minor issues, the Padfone 2 is a good-looking phone, and one that provides a fresh alternative to those who may've started to get bored with the looks of recent Android smartphones.

We'll start with with the smartphone half of the Padfone 2 package. Above the screen you find the earpiece, flanked by the usual sensors on the left and the front-facing camera on the right.

The usual set of functional elements above the screen

Below the display you get a trio of capacitive controls: (from left to right) Back, Home and Task switcher. The keys' backlighting can be set to be active for 2 seconds or 10 seconds after use or you can opt for always on.

There are three capacitive touch buttons at the bottom

On the right side of the smartphone you get the power key and the volume rocker - both of those are large and have good tactile feedback. There's no camera button here, though.

There are two keys on the right side

The left side of the Padfone 2 is completely bereft of controls or ports.

There's nothing to see on the left

The 3.5mm jack is in the center at the top of the phone, with the microSIM card slot nearby.

It's busy at the top

At the bottom you get the microphone pinhole and the proprietary 13-pin port. This is actually a customized microUSB port, which enables data and video streaming both for the phone itself and for the docking station. This means you get MHL and USB host functionality if you buy the required adapters.

Even though this is modified microUSB port, you can use regular microUSB cables for both data connections and charging. They don't fit very well though, so you have to be careful not to move things around too much to not get disconnected.

Asus uses a proprietary port, but you can plug in regular microUSB cables, too

Finally, at the back you get the 13MP camera lens, the loudspeaker grille and the LED flash. The back panel can't be removed or replaced which means you get no access to the Padfone 2's 2140mAh battery.

The 13 megapixel camera lens is the star backstage

It is said to last for up to 16 hours of telephony or 352 hours of stand-by, which sounded pretty promising and the actual performance didn't disappoint. We were surprised to see the Padfone 2 score a rating of 56h, meaning you would only need to charge it once every 56 hours if you do an hour of web browsing, an hour of talking and an hour of video watching per day. 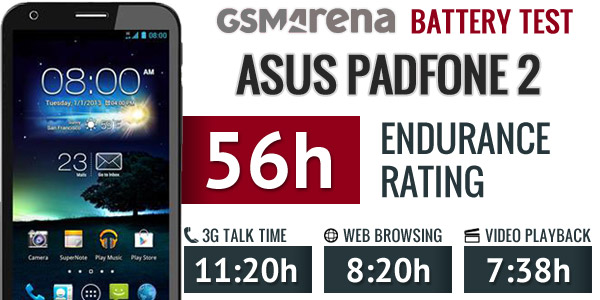 You shouldn't forget either that you can use the Docking station as a charging pack, without turning the tablet on. It takes the station 2 hours and 15 minutes to fully charge a flat Padfone 2 battery and you can do it twice before you have to charge the Docking station itself.