Remember the Asus Padfone 2? Forget it, it’s old news – the Asus Padfone Infinity was just announced and it steps up the specs. Asus also switched things around and announced the Fonepad – a 7” tablet with full phone functionality.

The Asus Padfone Infinity has a 5” 1080p screen with 441ppi. That catches up to the competition’s flagships, but more importantly the tablet dock screen has been improved too – it’s a 10.1” screen of 1920x1200 resolution. Both screens have anti-fingerprint coating.

The processing power has been upped accordingly too – the Padfone Infinity uses a Qualcomm Snapdragon 600 chipset with a quad-core Krait 300 CPU clocked at 1.7GHz.

The phone itself has a unibody design and is made of aero-space grade aluminum alloy, with brushed finish. The aluminum edge has been anodized twice (perhaps to one-up HTC).

The 2,400mAh battery inside the phone is pretty decent – it’s good for up to 19h of 3G calls, 6.5h of web browsing, 9h of watching video or 410h standby. With the 5,000mAh battery in the tablet dock, however, these numbers are tripled. 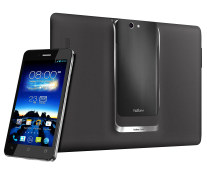 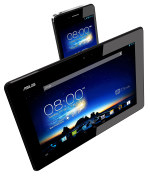 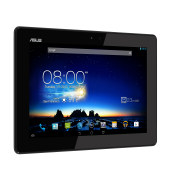 On the connectivity side, there’s 100Mbps LTE (Cat 3) and NFC (transceiver integrated into the Padfone logo at the back of the device). There’s 64GB of built-in storage and 50GB of cloud storage available.

Asus emphasized that with the Padfone you only need SIM card, one data plan, one monthly fee. So why not just make a tablet that makes calls? Well, they did – meet the Asus Fonepad.

It’s a 7” tablet with an IPS screen of 1280 x 800 resolution. But it also sports full phone functionality with 3G HSPA+ connectivity.

There are two versions of the Asus Fonepad. In Europe, the tablet will come with 16GB of built-in storage and a 1.2MP front-facing camera. It will launch in April for €220. For the APAC region, the Fonepad will have only 8GB of built-in storage but it grows a 3MP camera on the back. This one will launch in March for $250. Both have microSD card slots and 5GB of lifetime Asus WebStorage.

It's not a stupid question at all. I already have the asus tf700t tablet and I don't need the tablet part of the padfone equation. I do love the phone though and in my opinion there's no better Android phone out there. It has that rare combination of...

the padphone should have the tech that htc has on butterfly, wherein you can have a phone connected to it through bluetooth

stupid question... would it be possible to buy just the Phone and not both?