Thanks to VR-Zone, we see two slides acquired from an ASUS presentation that took place earlier today in France. The presentation was of the ASUS roadmap, which aside from the already announced Nexus 7 and the Memo Pad HD 7 mentions the PadFone Mini, MeMO Pad HD 8 and MeMOFone HD 5. 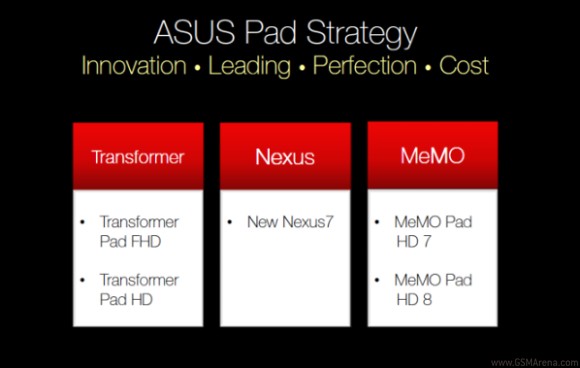 Aside from the names we don't get specifics on the hardware. The PadFone Mini could be a competitor to the HTC One mini and Samsung Galaxy S4 mini but could also refer to another full-sized PadFone but with a downsized tablet in tow. As for the MeMOFone HD 5, one can easily guess it will be a 5-incher, but it's unclear if HD stands for 720p or 1080p. We'd bet on the former as it would make sense to make it more affordable than the PadFone's that are currently on offer.

Finally we come to the Transformer Pad FHD and HD. These could be referring to the current Infinity and 300 series only with a name-change or could turn to be either a new flagship device and auxiliary lower-res sidekick.

These slides provide names but no information on release dates, prices or solid specs info, but we'll let you know if we hear anything.

what happened to the fonepad note fhd6 ?