For the third year in a row, Asus has been unwavering in its quest to deliver "The ultimate smartphone gaming experience". A task that it takes so extremely seriously that the ROG Phone line has become the ultimate embodiment of a halo product for the professional mobile gaming niche as a whole. By any measure, each consecutive ROG Phone model simply pushes the envelope so hard that it goes beyond just being a great gaming phone - it sets the bar for the entire industry.

Not unlike its predecessors, the ROG 3 is meant to go above and beyond the practical and sensible for an average consumer. It is the latest installment in a line of professional tools, meant to delight and even surprise the pickiest and astute among a growing, yet still small niche of gaming-oriented prosumers.

Exuberant and distinctly different from your average Android flagship, the ROG Phone 3 is a genuinely different beast. It's a product where every aspect has been engineered with the sole purpose of catering to a select crowd without caring for the latest fads in the smartphone industry. Accompanied by an unparalleled, sprawling accessory ecosystem meant to cover every possible use case, and the extremely particular needs and whims of the modern mobile gamer, the ROG 3 challenges the design and feature directions taken by other phone manufacturers.

The ROG Phone 3 is probably the closest thing the smartphone industry currently has to a super car - and we don't mean that in the gaming sense. Just like a real super car, it comes with high upfront and associated costs and requires a certain level of involvement and technological proficiency and implies a multitude of limitations when used as a regular, every-day driver. We will be taking all of that into account, as best we can in this review and so should you, if you are planning on picking up a ROG Phone 3. 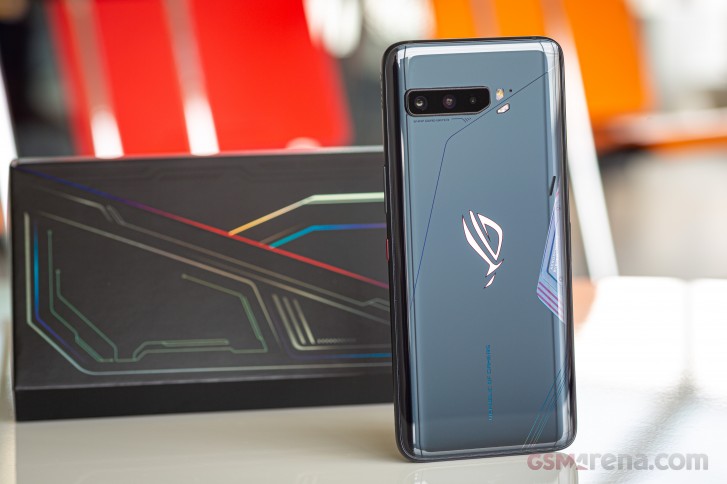 Continuing the super car analogy a bit further, it is equally important to note that just because you don't personally need one for your work commute or for the trip to the mall, that doesn't mean it has no place in the world. Same goes for the ROG Phone 3. In fact, Asus' continued ROG Phone efforts are not only admirable labor of love, but also a justified investment from a uniquely positioned company, leveraging years of pre-existing PC gaming expertise and pedigree.

Mobile gaming is unsurprisingly getting bigger by the day. Granted, most of its populafrity can be attributes to the casual gaming crowd. But this general growth has also translated pretty well into developing a group of devoted, and even professional mobile gamers.

These users have a different set of needs and requirements for their preferred mobile device. Asus has been dead focused on delivering on those in the best possible way and this has put the ROG Phone in the unique market position it occupies now. It's an admirable achievement and one that requires huge involvement and constant hard work. A task that is clearly getting harder and harder with each ROG Phone generation, since the ROG 3 is clearly more of an incremental and meticulous generational improvement, instead of the major leap forward the ROG Phone II represented. 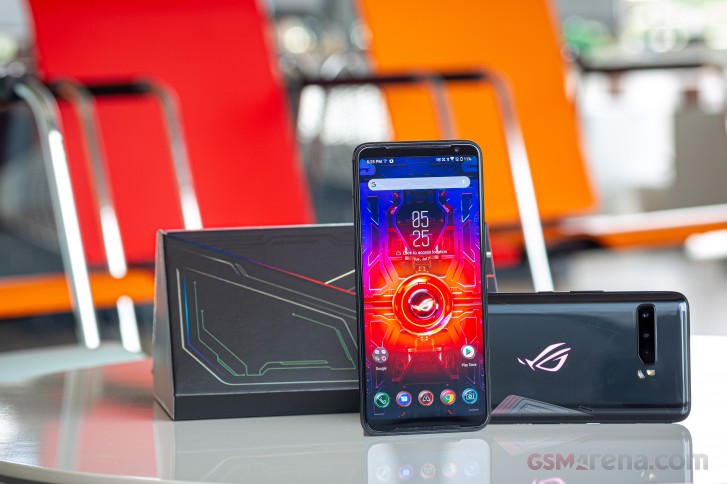 A faster 144Hz and overall better OLED display, Qualcomm's new speed-binned Snapdragon 865+ chipset, improved audio, cooling, cameras and a myriad of other tweaks are thoughtfully stuffed inside the ever so slightly re-designed body of the ROG 3, allowing backward compatibility with the ROG II accessories. Asus has clearly been in the process of fine tuning on the ROG formula and has done so by tackling head-on much harder challenges this time around.

Luckily, this particular kind of struggle fits perfectly into the company's core business philosophy of building hardware and software specifically for gamers and not simply as an afterthought, with a great level of dedication and attention to detail.

Mobile gaming presents a surprising number of specific challenges to work out on the road to a perfect experience. These range from very particular hardware ones to ergonomic concerns and everything in-between. Before we get to all of those, though, there is yet another aspect of modern gaming culture that Asus has also fully embodied - aesthetics. 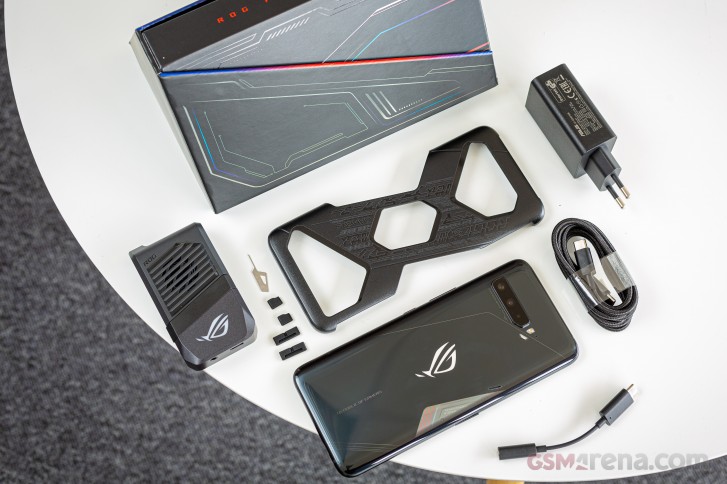 There is no single criteria as to what a "gaming aesthetic" is or should be, but it is definitely part of the culture. People want to flaunt their favorite past time and entertainment. Style points are surprisingly important. And the ROG 3 starts scoring these instantly even before it is unpacked.

Just like its predecessors, the ROG 3 ships in a bold and avant-garde geometrical cylinder box. Aggressive gaming lines and accents all over the place. The particular geometric pattern on the side of the box actually pulls double-duty as a magic AR symbol for unlocking the Armoury Crate app.

There is also the distinct way of opening the box - this time a huge chunk of it slides out of the other. Getting to the rest of the contents inside beyond that is still as challenging as it was with the previous ROG Phone generations. The phone is wedged in a deep pocket where it's well protected for sure, but almost impossible to get out. 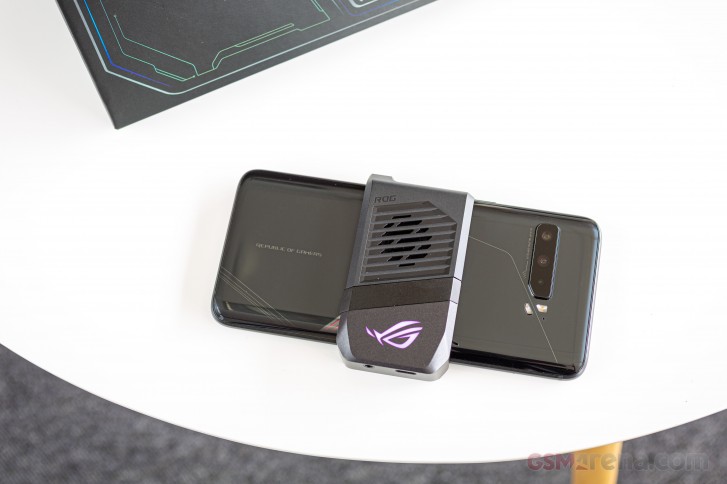 A rich accessory package is housed in the other part of the box. The AeroActive Cooler 3 is clearly visible and sits inside a neat groove. The rest of the goodies are housed a level deeper.

Also in the box - a compact, 30W Asus-branded, Type-C wall charger. It is a PD unit, equipped with the more-advanced PPS tech for finer power adjustments. To go with it - a nice, braided Type-C to Type-C cable that's not overly thick. Then again, it probably doesn't need to be since Asus still has its Direct Charging tech, now branded ASUS HYPERCHARGE. We can't be certain exactly how it works, but it has some of the charging circuitry in the charger instead of the phone, which leads to less heat buildup inside the handset and also, apparently, can work at full power with just a good-quality 3A Type-C cable instead of requiring a 5A one. This might partially explain the slightly thinner profile of the bundled cable. QC4.0 is also a supported standard by the ROG Phone 3, if you find yourself without the bundled charger. 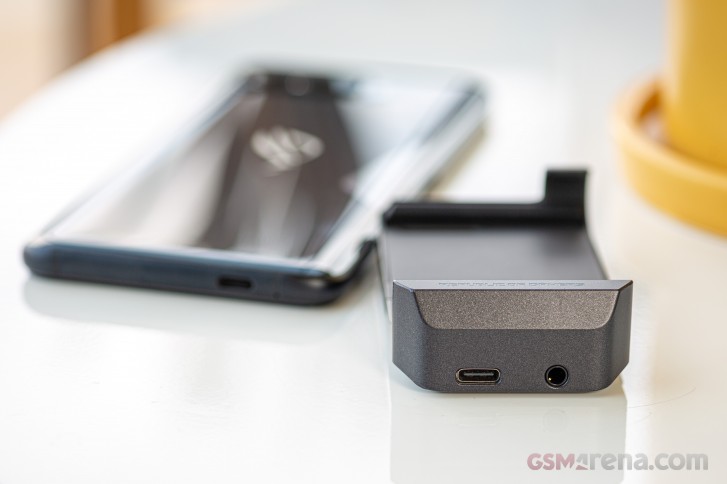 You get another cable with the ROG Phone 3, which is nice and also unfortunate at the same time. It is a Type-C to 3.5mm jack. The unfortunate bit is that the ROG Phone 3 has dropped the 3.5 mm audio jack. As per Asus, the maintain the same external size with the increased internal space requirements from things like 5G simply left no space for the jack. Make of that what you will. At least you get a dongle and, as a nifty bonus, the AeroActive Cooler 3 has a 3.5mm jack on its bottom side, as well.

Asus also includes a case inside its retail box. It is not a "case" in the conventional sense since the Aero case leaves a big chunk of the phone's body exposed. It is more of a bumper to protect the corners. Its gamer-y design is not purely for looks. It is also meant to allow for better cooling or rather not get in its way. The case itself is fully compatible with the bundled AeroActive Cooler 3 and also leaves the RGB ROG logo visible. 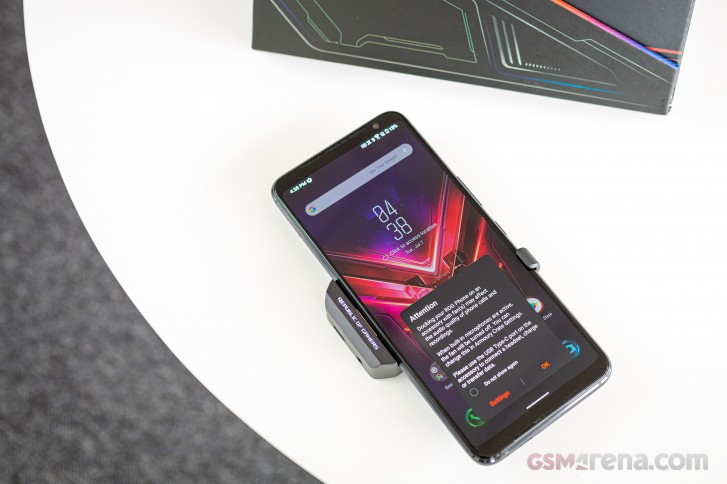 Last, but not least, Asus tops the extensive ROG Phone 3 retail package by throwing in a couple of spare rubber dust covers for the Side-port, in case you lose the one already on the phone. Even a variant with two separate smaller dust covers is included. And, hidden away in a smaller box, you also get a bunch of Asus and ROG stickers to decorate some of your other things. As we said, gaming can be a fashion statement, and Asus know how to play this game well.

Asus rog phone 3 is one of the most problematic and worst phones in the world. For gamers, it is like a dream phone. Although I was one of them and I bought this phone a year ago, there are some benefits to playing games on this phone which is now a ...

Unfortunately no, ROG 5 has different port for accessories, so they're not cross compatible.