The Asus Zenfone 2 showed up in the Antutu database, posting impressive results. The 50401 figure in the screenshot is sufficient for the Zenfone 2 to inch ahead of the likes of Snapdragon 805 powered Samsung Galaxy Note 4, and Meizu MX4 with a Mediatek MT6595 inside.

The Zenfone 2, which was tested, had a powerful Intel Atom Z3580 chipset with a quad-core processor, clocked at up to 2.33GHz. The GPU is not Intel's work, instead it's the PowerVR G6430, borrowed from Imagination. It should be pointed out, that the score was achieved with "only" 2GB of RAM on board. 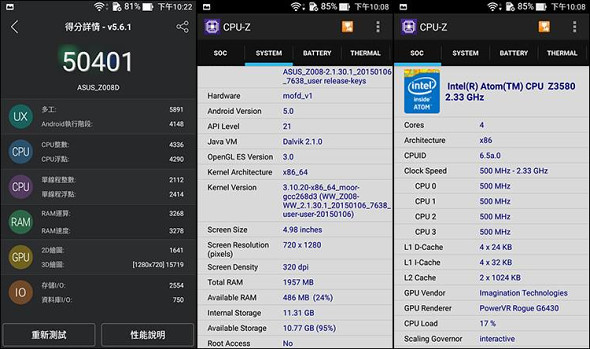 There's a catch though. With Asus' naming convention you rarely know which exactly device you're talking about. The smartphone in question sports a 5-inch display with 720p resolution, and the chipset has it easy, having to push out less than a million pixels.

On the other hand, the Meizu MX4 has a 1,152 x 1,920px panel, which is more than double the amount. Not to mention the Note 4 and its QHD display with, you guessed it, four times as many pixels.

Nevertheless, it's a very respectable achievement from the Atom and it's precisely what Intel needs to fight for a more prominent position in the Android realm.

I don't pick the word compact. it's huge and hard to handle. I think it's the only problem i got with it. I can't literally hold this phone :D

The specs don't match but this could be a pre-production model so quite possibly an early representation of the Zenfone 2.