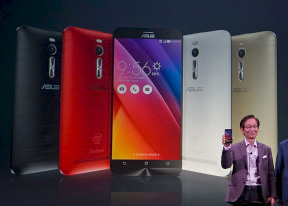 The Asus Zenfone 2 ZE550ML has the same screen size as the flagship model, but the resolution is just 720p, and the chipset is different too - in this case an Intel Atom Z3560 with a 1.8 GHz quad-core CPU, PowerVR G6430 and 2GB of RAM. This model comes with 16GB of expandable storage, and costs €249.

The phone looks a lot like the flagship ZE551ML model, but lacks the premium editions, which enhance the rear panel with different colors and textures.

Asus Zenfone 2 ZE550ML rear cover is made of plastic, but you can't tell it at first, which means Asus did a good job with the choice of material and texture pattern.

While it does have LTE support, the ZE500CL tops out at Cat.3, which means theoretical peak download speeds of up to 100Mbps, whereas the 5.5-inch versions both enjoy Cat.4 LTE, going up to 150Mbps.

It looks a lot like the 5.5" Zenfone 2 with the HD display, but its screen bezels aren't as impressive as on the bigger models. It has the same rear controls and plastic rear cover as the Zenfone 2 ZE550ML.