World domination was surely on the mind of at least one top exec over at Asus headquarters, when the crew gathered to outline the Zenfone 2 game plan. The smartphone will be sold globally, and the stores in a few lucky countries already have their shelves well stocked. The company is aiming to sell 30 million phones this year, with the Zenfone 2 being a chief contributor to that number.

Update, June 11: After spending some quality time with the top-of-the-line Asus ZenFone 2 with Intel Atom Z3580 SoC and 4GB of RAM, we added its benchmark scores to the performance page of the review.

We have also updated the camera section on the original Zenfone 2 2GB, which we reviewed, after installing a new software V2.17.40.12, which considerably improved image quality. 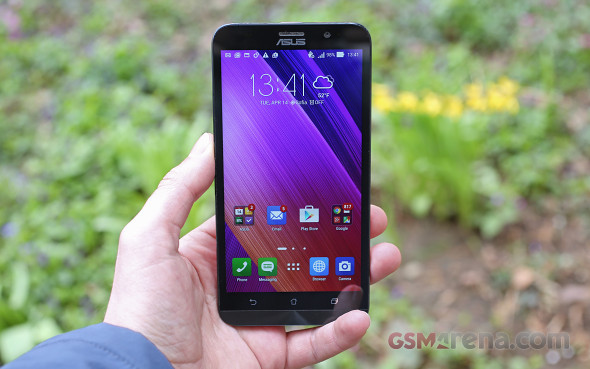 Now, Asus doesn't make it easy on the prospective buyer as they offer the Zenfone 2 in a number of model variants - a range of devices under one and the same name. The entry-level ZE500CL comes with a five-inch 720 display, Intel Atom Z2560 chipset with its quad-core processor clocked at 1.6GHz, and 2GB of RAM. The ZE550ML ups the screen size to 5.5 inches, while keeping the HD resolution. The processor inside the Atom Z3560 ticks at 1.8GHz, and RAM is the same.

Then there's the ZE551ML, which sports a 5.5-inch diagonal and a FullHD resolution. Even the ZE551ML moniker wouldn't tell you what's packed inside, as there's a version with the same Atom Z3560 and 2GB of RAM and a top model, sporting an Atom Z3580 with specs going all the way up to 2.3GHz and 4GB of RAM.

To give Asus credit, probably not all models will be available on all markets and that may settle it for you, depending on where you live. The one we have at the office is the ZE551ML with the lower-specced hardware, meaning an Atom Z3560 and 2 gigs of RAM.

With that confusion cleared up, we're now moving to the task at hand.

The Zenfone 2 ZE551ML is also a looker, sporting a plastic back, which emulates brushed steel, and does so quite successfully. Our unit is dressed in Glamor Red but multiple color options are available to please a wider target audience.

What all that adds up to is a proficient package, positioned in the upper midrange. At a price point around the $220 mark, it's also a compelling offer, hard to say no to. You could opt for the faster processor and double the RAM, and that would set you back around $280, still a bargain. Mind you, those are the numbers valid for most of Asia, while European figures are noticeably higher with the top model priced at €299 for a limited time, after which the price will become €349.

With that aside, join us on the next page for the usual unboxing and hardware.

the asus zen fone 2 is good in you life

Any chance to upgrade this phone to Android Nouget, guys? (Unofficial upgrade of course) Direct me to link please..! Mine is Z00AD version. Thanks