Update, June 11: After spending some quality time with the top-of-the-line Asus ZenFone 2 with Intel Atom Z3580 SoC and 4GB of RAM, we added its benchmark scores to the performance page of the review.

We have also updated the camera section on the original Zenfone 2 2GB, which we reviewed, after installing a new software V2.17.40.12, which considerably improved image quality.

The Asus Zenfone 2 ZE551ML stands before us after the rigorous battery of tests, having proven itself as the smartphone it was advertised to be - a balanced midrange offering that is easy on your wallet. Its good looks and solid build are complemented by proficient hardware, but the smartphone is not without its shortcomings. 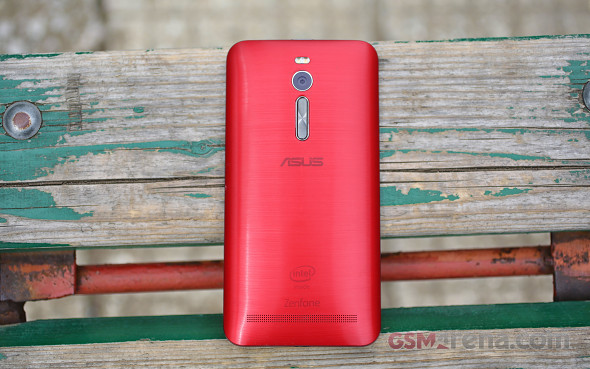 One may call the Zenfone 2 an LG copycat, as it's clear where the designers have looked for inspiration. The volume rocker on the back, together with the cover's texture scream LG G3, but even so the Zenfone 2 looks great and may pass for a premium handset.

The 5.5-inch display is not overly bright, but puts out great colors and the FullHD resolution is still plenty sharp at this diagonal. Battery endurance isn't anything special but the Zenfone 2 still manages two and a half days overall and screen on-times are around the 8-hour mark. That is, if you refrain from using Asus' own browser, which kills the battery in no time.

After the latest firmware update, the smartphone's camera is much better now with image quality nicely benefiting from a new processing routine. Unfortunately, we didn't see much improvement in the video recording department and it's still far from 1080p content from the leading offerings on the market.

The competitors of the Zenfone 2 ZE551ML are largely dependent on where you are in the world, and the reason is two-fold. First, the availability of its rivals is largely market-dependent, and secondly the Zenfone 2 is quite differently priced in different parts of the globe. What can be had in most of Asia for the equivalent of $220 will retail in Europe for around €300.

The LG G2 is among the top competitors the Zenfone needs to face. At 5.2 inches, the G2 has a slightly smaller screen than the Zenfone 2. It also packs a superior camera with optical image stabilization. The Zenfone 2 consistently beats it in benchmarks and comes with dual SIM slots and microSD expansion, and the G2 is lacking in both aspects.

Samsung's Note 3 Neo is the same screen size, but at 720p it's not as sharp, but it is AMOLED nonetheless. The Note 3 Neo is not as powerful as the Zenfone 2 in benchmarks, but it has a stylus and a removable battery. There's also a Duos version for those who consider the dual-SIM capability to be a top priority. Its price in Asia is close to the $300 equivalent, so it commands a significant premium over the Zenfone 2. In Europe it can be had for around €300, making it as expensive as the Zenfone 2.

The HTC Desire 820 is another viable proposition in the midrange phablet world and it's 720p at 5.5 inches. It comes in dual-SIM flavor too and has a microSD slot. An 8MP front camera may sway the more narcissistic folk in its direction. While it may be priced on par with the Zenfone 2 in Europe, it's substantially more expensive in Asia, so regional considerations comes into play once again.

With the invites no longer that much of an issue, the OnePlus One is still a strong contender despite a recent price increase. It offers a screen the same in size and resolution as the Zenfone 2 but you need to live with a single SIM and no microSD slot. The 16GB/64GB versions cost €300/€350 in Europe and $300/$350 in Asia so the Zenfone 2 can easily take on the One in every market.

The Oppo Find 7a recently got a price cut and can now be had for €350 with a whole bunch of accessories, making it worth your while. It has the same-sized 5.5-inch 1080p display, and has a microSD slot as well, but no second SIM slot. Video recording goes up to 2160p on the Find 7a, unlike the Zenfone 2's mediocre 1080p.

The Zenfone 2 is a feature-rich package with a semi-premium design, dual-SIM flexibility and plenty of power for daily tasks. All of that comes at a compelling price, too. How far up your shortlist it will end up depends largely on how willing you are to live with its less than ideal camera output.

Obviously, the spot where you are in the world will play a chief role as well, with more value to be found in the Zenfone 2 ZE551ML on its home continent, rather than outside of it. Either way, the smartphone has enough merit to grab a chunk of the crowded midrange market.