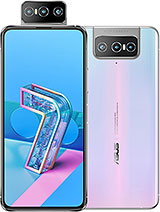 Adrian, 26 Aug 2020I hope a FM Radio will be included. Its the only phone with superb specs having this very usef... moreUnlikely considering they removed the headphone jack (usually they use the headphones as the antenna for FM radio)

My opinion is
this with IPS 90Hz + jack + lower price and Pro with AMOLED 90/120Hz + OIS
would be worth to consider. Phone doesn't look bad, pretty heavy though. That's all.

AKW2020, 26 Aug 2020Which one causes more eyestrain, OLED or IPS/LCD?I have never experienced eyestrain on any panel tbh, OLED or LCD, any looks fine, only issue are the lower quality LCD panels, the ones that aren't IPS or similar, looking really bad, but no eyestrains.

Anonymous, 20 Aug 2020Worldwide industry push towards amoled is for the sake of breaking more quickly so they can se... moreWhich one causes more eyestrain, OLED or IPS/LCD?

Was expect disappointment somewhere, and Asus did not disappoint! This break the historical price for the top Zenfone lineup to all time high. Sure, cheaper than Samsung, Sony and the like, but Asus simply isn't there. Guess now OnePlus does look more attractive for me.

Anonymous, 26 Aug 2020Why you call OLED a superior technology, when it has worse sun viewability, burns in, makes ey... moreI'm sorry for your bad eyesight

Haha it's AMOLED after all and all the IPS LCD fanboys are crying. Glorious.

Asus doesnt sell their own headphones. Then what is the point in removing the hp jack from the phone? Getting a type C to 3.5mm dongle is also very tough. Asus simply missed its golden oppurtinity by launching this crap. This phone should become a flop coz f lack of 3.5mm jack.

So it has a few small improvements over the Zenfone 6, but those come with a significant price increase. Dissapointed about the removal of the 3.5mm headphone jack, and the wide angle lense Field-of-View FOV has been reduced from 125 degrees to 113 degrees. And the global availability is even worse than the Zenfone 6 was. Still an overall thumbs up I guess as it's nice to see that swivel camera stick around.

Looks great, just that 3.5 mm jack is missing. I hope pricing is around 40k for Zenfone 7. Could be great for me to upgrade from Zenfone 5z.

I hope a FM Radio will be included. Its the only phone with superb specs having this very useful feature.

If priced right, this phone can be a success in India . Only non-chinese phone with sd865+

Why you call OLED a superior technology, when it has worse sun viewability, burns in, makes eyes bleed and gives weird colours, especially with DC dimming? boo hoo, but the blacks are deep and we don't even see the difference!

Should've kept the IPS display on at least the non-Pro version. I don't care if OLED fans want to pay more for a display with a shorter lifespan. Burn-in on OLED is uglier than the lower contrast of IPS, plus you barely see the difference between OLED and IPS in the day time or when the lights are on in your room.

Also wanted the 3.5 mm jack but ehhhhh who cares anymore.

Total of 181 user reviews and opinions for Asus Zenfone 7.
ADVERTISEMENTS