Asus is expected to launch the new Zenfone 7 on August 26 – actually, rumor has it that there will be two models, one with the Snapdragon 865 and one with the 865+.

The latter is tentatively dubbed “Asus Zenfone 7 Pro” and according to leakster Roland Quandt it will cost €550. In this version, the chipset will be paired with 8 GB of RAM and 256 GB storage.

Quandt says that there will also be a 6/128 GB version priced at €500, presumably still with the Snapdragon 865+ (though 6 GB of RAM seems odd next to the chipset found in most flagship gaming phones right now). Battery capacity should be 5,000 mAh. 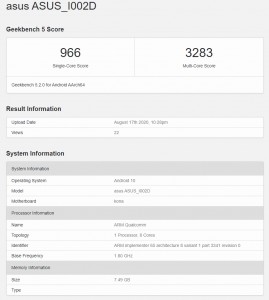 An Asus I002D, likely the Zenfone 7, ran a few trials at Geekbench. The benchmark reports a Snapdragon 865 chipset (aka “kona”, it’s not clear if this is the plus or not), as well as 8 GB of RAM. The software is based on Android 10 and since this is Asus, it should be pretty close to stock.

The Zenfone 7 duo might prove an interesting alternative to OnePlus phones whose price has gone up quite a bit since the beginning. There's very little info about the Zenfone's screen and cameras, however. If you remember, last year's model had a flip up cam acting as both rear and front cameras.

Judging by this teaser video from Asus, it looks like the Zenfone 7 will have a flip up camera as well - there's no notch or punch hole visible anywhere on the screen.

Yeah. That is good news. Just a shame about the 60Hz refresh rate, I really thought they'd use something better this time especially since the phone will have SD865 which is more than capable of driving higher framerates.

It is confirmed an LCD man I am so happy