AT&T announced the latest addition to its prepaid lineup - the slide-out QWERTY packing Samsung Galaxy Appeal. The smartphone will be available at Walmart stores first, in the beginning of next month, priced at $150. More AT&T GoPhone retail locations will follow in July. 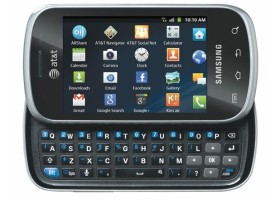 The specs of the Samsung Galaxy Appeal include a 800MHz ARM Cortex A5 CPU and Qualcomm MSM7225A chipset. There is 512MB of RAM and 1.8GB of built-in memory, which can be further expanded via a microSD card. The screen is a 3.2" unit with HVGA (480x320 pixels) resolution. A 3MP camera and a 1300mAh Li-Ion battery complete the picture. The OS on tap is (unsurprisingly) TouchWiz-ed Android 2.3 Gingerbread.

will it launch in Indonesia? I've been waiting for it! Please launching this phone in indonesia...

This is a go phone that will cost like $150 out right to own the phone. You're in the wrong thread.

You have got to be kidding me. My HTC Desire Z that is a year and a half old makes this phone look like a piece of junk. http://www.gsmarena.com/compare.php3?idPhone1=4771&idPhone2=3421