It was about time HTC Tilt2 to officially hit the market for the AT&T customers, since its sibling HTC Touch Pro2 was released way back in May. In the same time T-Mobile USA introduces Motorola CLIQ or DEXT as it's known on the Old Continent.

The long awaited Tilt2 won't come cheaper though and it's got a pricetag of 350 US dollars on contract before a $50 mail-in rebate. The competing T-Mobile USA just announced the market availability of the Android-driven Motorola CLIQ, known as Motorola DEXT in Europe. T-Mobile USA, which have the CLIQ exclusivity in the USA, offer the headset for its most loyal clients ahead of the official launch date of 2 November. The CLIQ price tag of 200 US dollars on a two-year agreement is again confirmed. 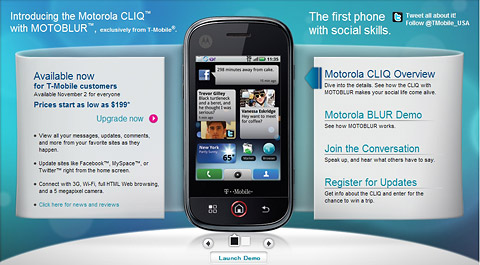 Meanwhile AT & T sold millions of iPhones in the last quarter, 7.4 million sold worldwide, Apple profits up to $1.6 Billion, almost 21 million iPhones sold in the year to September 30... ...no excuses about a recession or component shortages, in...

YAWN. I'm waiting for Motorola's Droid. Should be AWESOME.