CES looks to play host to AT&T's suspected unveiling of the Samsung Galaxy Note for the US market. The Pocket Now team have some pretty sharp looking images that could at least demonstrate how the Galaxy Note would look if it joined AT&T's lineup. 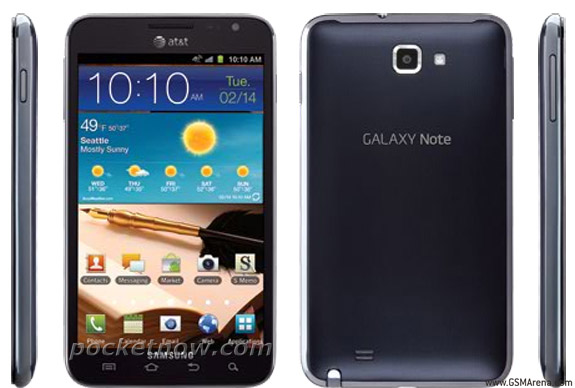 The key difference is expected to be in the layout on the front, especially with their previous flavors of Galaxy S II and Galaxy S II Skyrocket devices in mind. Both of which follow the more typical four button layout for Android devices, at least over the twin capacitive, single hardware key layout used by the likes of the European Galaxy S II.

AT&T's Note is said to utilize a 5.3" Super AMOLED which displays at a healthy 1280x800 pixels, supports Android Gingerbread and offer LTE functionality too. Once CES has kicked off, we can apparently expect to see the SGH-I717 Samsung Galaxy Note by February 14th.

Clearly you guys complaining about updates and size and things like that, got stuck somewhere with no way out, and now you are looking to blame it on someone other than your own stupidity of not having found your own solution. Now suddenly the compan...

got mine from thailand and work with at&t just fine....love it.

Even though it is not Super Amoled PLUS, it is still my pick. Robert Lichota