Kantar: iPhone X is best-seller in China in Q2, Android is the dominant OS

Kantar Research has published its latest report on the smartphone distribution in key markets during the three months ending in June 2018, which shows that Android is still the dominant OS but that iOS is eating up its share in markets like the US.

Android's surge in the UK is mostly down to the positive performance of the Huawei P20 Pro, which lead Huawei's UK market share from 2.7% in Q2 of 2017 to 13.7% in Q2 of 2018. Huawei has been a key factor in Android's OS share expansion in China as well.

Interestingly, the iPhone X is the best-selling device in China and has been every month since it launched in November of 2017. 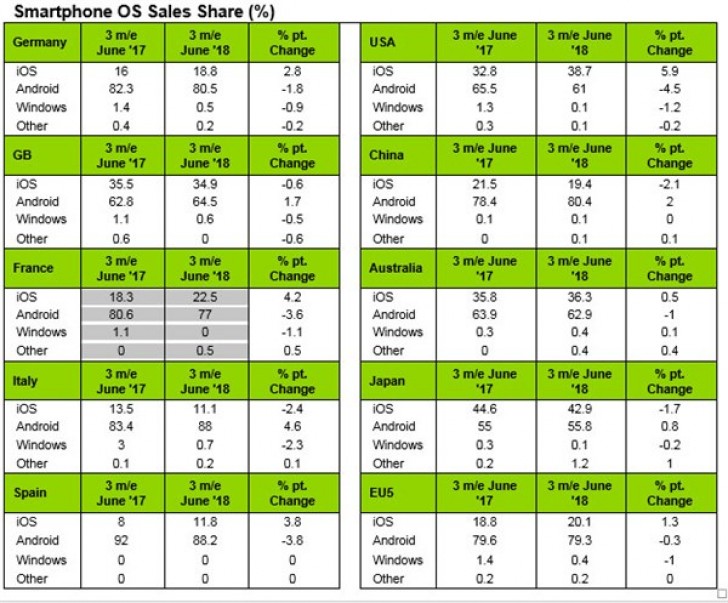 Apple dominates the sales in the States as well and is enjoying an unprecedented position - having 8 of the top 10 best selling smartphones. Its success was spearheaded by dominant iPhone 8 and iPhone 8 Plus sales but it also has a phone in most price points, from the iPhone SE to the iPhone X.

Please tell me at least one marketable feature that Apple back ports to it's older models. Yup. There are NONE. A "cheap chinese" brand like Xiaomi is back porting a highly marketable feature like Portrait Mode to it's 2 year old models, which even...

IPhone X is made in China so maybe you have fake one.