Originally conceived as an Indiegogo-funded product, the Atmotube's series of personal air pollution monitors give you insight on key air parameters in your immediate vicinity - Volatile Organic Compounds (VOCs), as well as Particulate Matter pollutants in sizes of PM1, PM2.5, and PM10 micrometers. 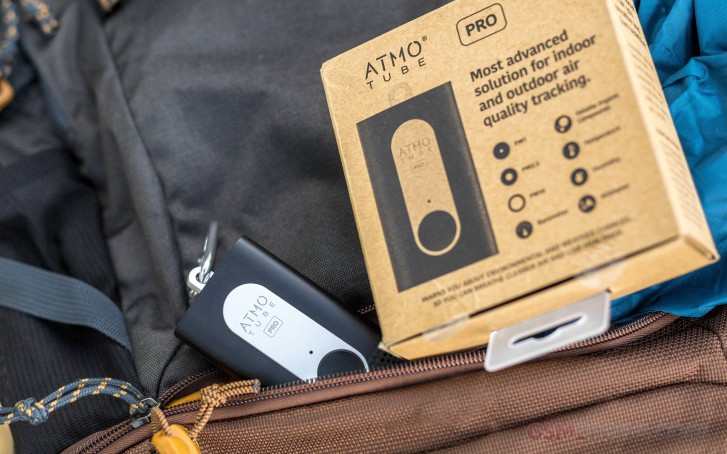 The gadget also monitors ambient temperature, humidity, atmospheric pressure and can also serve as an altimeter.

The temperature, humidity and pressure readings are interesting as well

It connects to your smartphone via Bluetooth LE 5.0 and is equipped with a 2,000mAh battery, which lasts it about a day when constant monitoring is enabled.

Physically, the AtmoTube Pro is simple - you get a single button, a color LED, and a USB-C port for charging. There is a tiny fan inside which sucks in air for testing, but I didn't realize its presence until I was told it was there - it's whisper quiet.

Pressing the button lights up the LED to show you the current air quality which is something you might want to use if you don't have the app at hand. 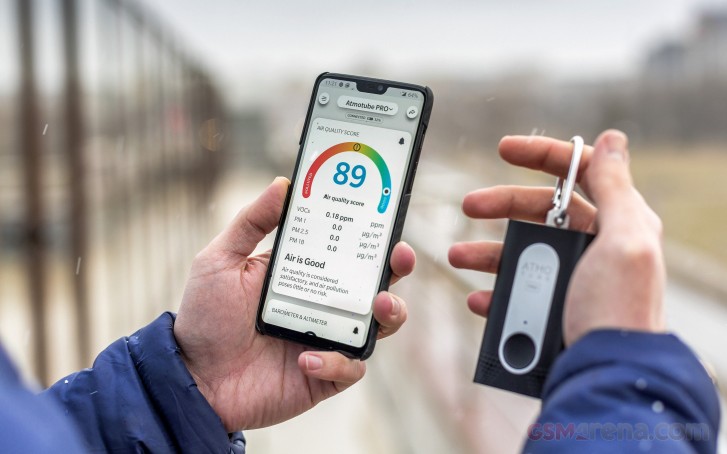 Otherwise, all the measured data is visualized on your phone with much more detail and historical records. Even if you don't open the app, under Android you get a persistent notification which shows you the air pollution at a glance at all times.

Who is it for?

I don't need to tell you why air pollution might be important to you.

There are people who are particularly sensitive to it - people who suffer from chronic lung disease or asthma and that's without even considering kids and the elderly, who are another risk group.

My best guess is that you'd get one of these devices if you are among those people or if you live in a particular polluted environment so you know whether you should put a mask on or not when you go out.

Before the AtmoTube Pro arrived for testing, I didn't have much interaction with air quality testers on a micro level - unless you have one of those Air Purifiers which has the tech built-in, the commercially available devices I had stumbled upon really limited themselves to VOCs measurement. And even those were of the home-air-quality-type testers rather than portable ones. 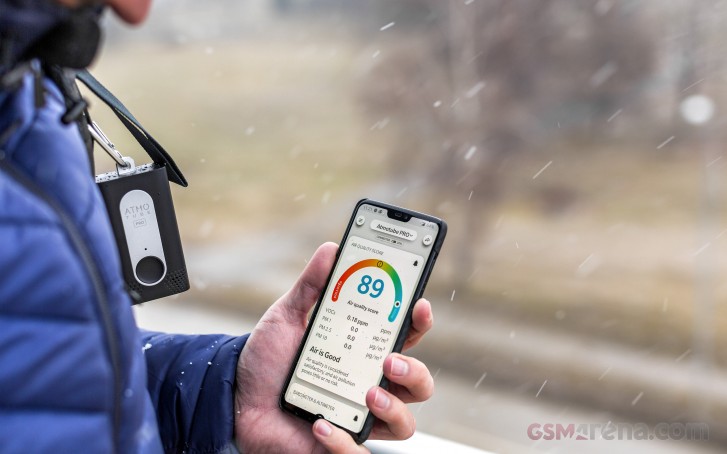 At 105g, the AtmoTube Pro is so compact and easy to carry around that I would frequently forget it was physically with me if it weren't for the air quality data constantly streaming live on my phone's screen.

The companion app is polished and with a very friendly user interface. It allows you to set up alarms for particular pollution levels and it offers advice on understanding the data and how you can act on it.

The app will alert you of dangerous air pollution levels

Having AtmoTube Pro with me made me much more aware of my environment and especially how the air quality indoors would vary and how it affects me.

Surprisingly (at least to me), poor air indoors is not easy to feel - at least not before your throat has started feeling dry, which was the first symptom I experienced after an hour of sitting in a room with higher levels of particulate matter. VOCs, on the other hand, didn't cause any immediate symptoms, so they are more of an invisible threat, the significance of which I find harder to estimate.

That aside, the AtmoTube Pro helped me shrug off a misconception or two. For instance, I was surprised to find out that the chemical smell of fresh paint or the strong odor of new plastics didn't automatically mean polluted air. 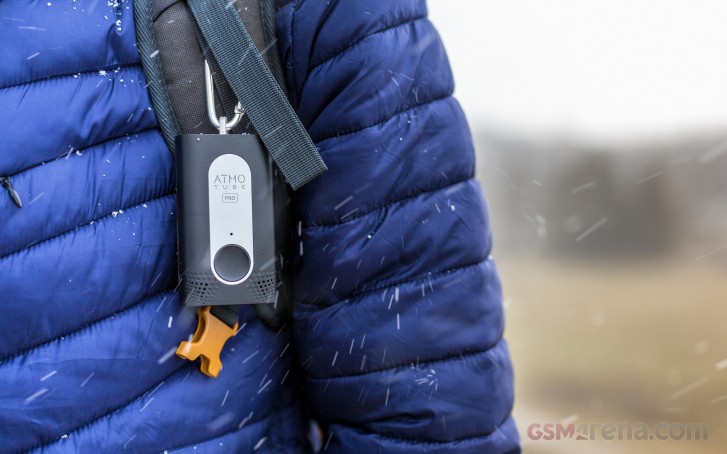 While at the same time, I was surprised to see that tobacco smoke lingers on for quite longer than expected - smoking a single cigarette at an open window can still compromise the air quality in the room for an entire day even after airing the space with windows open multiple times.

Even worse, the air contamination caused by smoking is not contained to the room you are smoking in, but it degrades the air quality in the other rooms in the apartment.

I can see this device potentially helping smokers be more aware of the air pollution they cause indoors which might help curb the bad habit, especially if they care more about the health of their close ones than their own.

So overall, I'd say this device really lives up to its promise and wearing one constantly with you is an eye-opener. But much like with my experience with pedometers, the effect of having this new layer of information about your environment soon wears out.

Where it falls short

This is where the whole concept falls short for me, even though it is not a deficiency of the device itself.

Unless you live in a severely polluted environment where you need to take active measures to protect your health every day, the eye-opening effect of having a personal air quality tester quickly wears out.

We human beings are creatures of habit. We go to the same places at the same time of day. We have our routine, and we usually stick to it. So when you get to know the air quality level at the places you frequent, then you really stop being interested as much in the real-time readings from the device. 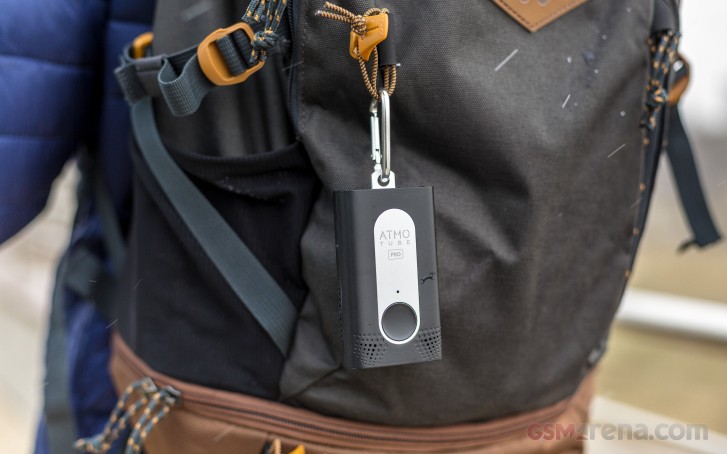 For two-three weeks I took the device everywhere I went. Once I got used to what to expect at each place since there is little variation in the air quality indoors, I simply stopped being interested in knowing the exact numbers.

Aside from that, there are a lot of times when there is hardly anything you can do about the specific air pollution case, which makes 'knowing' not of much use.

In my city, the peak Particulate Matter (PM) levels during winter can get somewhat nasty, and the general advice is to avoid going out or airing the rooms at the times of day when the air is bad.

But I didn't have any choice but to walk my dog twice a day. I also don't get to pick the time of day I do my work commute.

So air quality is what it is, and sometimes you just have to suck it up and go out. Of course, more sensitive people would probably use this as a cue to put on their breathing mask, but that just wasn't me.

Also, when the meter detects high levels of Volatile Organic Compounds (VOCs) indoors, it may recommend to let some fresh air in, but you'll never know which object in your house emits the high levels of VOCs so you can remove it or replace it.

Did the unusually high levels of VOCs I measured around my dining table on the first day I had the AtmoTube Pro tell me anything? Well, not really. Especially when on the days after that the readings were back to normal.

Also, higher VOCs will trip the air pollution alarm in the app a lot easier than an increase in PM, so the lack of actionable information about the source of the VOCs may make the Air quality index the app produces a bit less tangible. Of course, this isn't a deficiency of the device itself, but just an observation.

And when it comes to the measurement accuracy, watching the PM2.5 and PM10 readings show the same numbers all the time, I developed the feeling there was no fine level of precision there.

Other than that, without a reference tester, I didn't have any other way to test the accuracy of the device. My impression, however, is that if you are not after a super accurate number, you will be fine with the output of the AtmoTube Pro.

Finally, battery life has not been stellar. If you have a constant real-time sampling enabled, you will need to charge the AtmoTube Pro every night. You can allow less frequent air sampling (once every 5 minutes), and this would give you better battery life, but still, you would need to charge it every 3 or 4 days. The manufacturer recommends you use the constant measuring while you are on the move and switch to the less frequent measurements while you are stationary indoors.

And partly related to the battery life situation, it turned out that if you forget the device at home or it runs out of battery, the app on your phone will continue searching for it and this would drain the phone's battery heavily. So I had to kill the service manually every time I had the device out of range. It would, however, frequently re-spawn on its own, eating into my phone's battery before I realized its presence. I found that strange as the app was no battery hog when the device was in range and connected.

How much does it cost?

Retailing around $130, the AtmoTube Pro is relatively reasonably priced. It will be launching in May so at the moment you can only pre-order it on a first-come, first-serve basis.

The device inspired the ever-inventive mind of my colleague Victor who ordered a handful of electronics components off Aliexpress.com and built an alternative proof-of-concept version of his own based around the ESP32 platform. The whole thing cost him about $40 in components, and it measured the same things that the AtmoTube Pro did.

But getting it up and running was no trivial task. Victor had to write the code to get the whole thing working, and he didn't bother making an app for it and resorted to just having a simple webpage showing the live data.

Sure, it only took him a day or two, but the end product was far from a retail-ready product being just a PCB with an attached battery and some sensors sticking out of it.

So accounting for R&D, product design, software design, manufacturing, distribution logistics, marketing, and sales, the AtmoTube Pro feels priced reasonably. Also, there is hardly any competition, so that makes it an even more obvious choice if you are after a device of this sort.

With all that said so far, I was happy I got to test out the AtmoTube Pro, and I enjoyed seeing how the air around me changed as I went about.

I learned that the air in my car is mostly very clean of PM pollutants, that I should spend as little time as possible in smoking households even if no one is actively smoking around while I am there, and that even up in the mountains the air may not be at its cleanest, purest form.

But at least for me, the AtmoTube Pro is not impulse-purchase worthy. If you are among the people who are extra sensitive to air pollution, you won't need to be persuaded into buying it. But for me, I'd rather have the option to rent one for a few weeks than outright buy it as its perceived usefulness diminishes quickly with time (except its weather station use case which I found amusing).

People who are particularly sensitive to air pollution or people who live in cities with bad air and spend a lot of time outside should get a device like this.

For the rest of us, having a personal air quality tester is nice to have, but not a necessity. I will tell you this, though - if you think weather is a great conversation starter, you should see how air quality gets people talking.

Australia is burning. We Australians are use exercising in a clean outdoors. It has been a shock to have that taken away by the smoke of hundreds of fires. Worse, our denialist Government refuses to see the supercharging of the normal bushfire sea...

Reall good honest review, thank you and good luck what ever you do :)

Reall good honest review, thank you and good luck what ever you do :)