Last night, Pokémon Go quietly began rolling out in various countries around the world including the US, Japan, New Zealand and namely, Australia, where the North Territory Police Department published a Facebook post reminding new Players of the game to stay safe and watch their surroundings when playing the GPS-based mobile game.

This message came about as many players were stopping inside the Police station which is marked as a landmark in the game as a Pokestop where players can collect items and pokéballs from Pokéstops all over town at various landmarks. 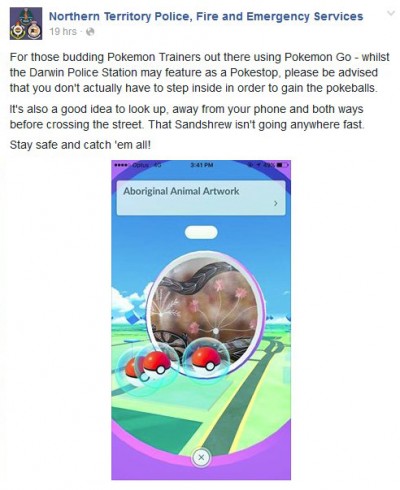 The message tips players that they dont need to actually enter the Police Station in order to collect pokéballs. As well as reminds players Its also a good idea to look up, away from your phone and both ways before crossing the street. That Sandshrew isnt going anywhere fast. Then ends it with Stay safe and catch em all!

that's why there is no monster here on the Philippines because they are afraid in our President! hahaha \m/,

Where do you live? The app is region based.. It's not out WW yet that's why there's no Pokemon in your area.

I can open my pokemon go here in philippines with no errors but no monster here in my area trying to figure out how to have one. But maybe there was a error in my app. Try to used the items to lure the pokemon for 30mins but my loction is not found. ...