A GFXBench listing confirmed the previously leaked specs of Microsoft’s yet to be announced Lumia 1330 phablet. The successor of Nokia Lumia 1320 is expected to debut during MWC 2015 in Barcelona. 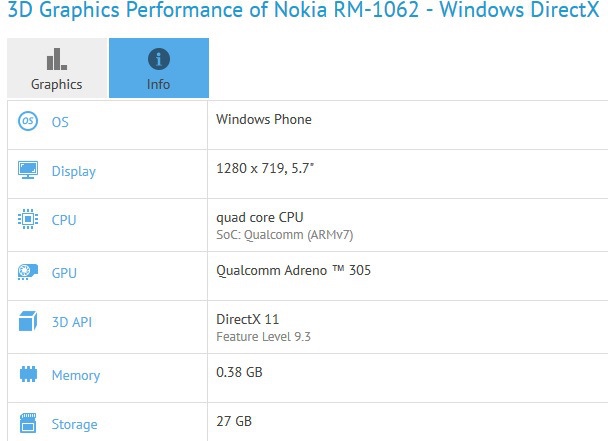 Sporting a model number RM-1062, the Lumia 1330 features Qualcomm Snapdragon 400 chipset with quad-core CPU and Adreno 305 GPU. A gig of RAM (the screenshot shows the available memory at the time of capture), 32GB of built-in memory, and 5.7” 720p display are also on board.

The main camera of Microsoft Lumia 1330 is 14MP PureView unit capable of 1080p video capture. The secondary camera is a 5MP solution, which can also record FullHD video.

Microsoft Lumia 1330 may launch with Windows Phone 8.1 GDR2. We will be keeping an eye out for more news about the device going forward.

Why is Microsoft repeating Nokia mistakes? Making the same device again and again with the same underpowered internals and selling it as top level, as it did with its ARM11 processors. That simply doesn't make sense.

This is just a midrange phone. Why are you asking for high end specs? -_-