Nearly a month after it was found listed on AnTuTu, the OnePlus 3 has been spotted on a couple of more benchmarking websites, including GeekBench and GFXBench. What's newsworthy here is that the GeekBench listing shows a whopping 6GB RAM for the device.

The GFXBench listing, however, is inline with AnTuTu, indicating 4GB RAM for the device. In addition, it also reveals SD820 chipset, 16MP/8MP camera combo, and Android 6.0.1 Marshmallow. The display resolution is full HD and the size of screen is 5-inch, which is less than the 5.5-inch size that was being rumored earlier. 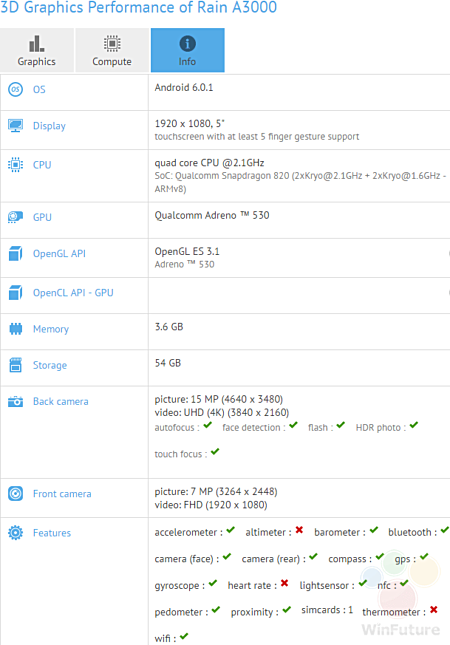 Coming back to the amount of RAM, while it's entirely possible for benchmarks to get things wrong, there could also be a possibility that the models 'RAIN RAIN A3000' and 'Rain A3000' are actually two different variants.

While things aren't clear at this point, we're hopeful that more information will be revealed in the near future as latest rumors say that the OnePlus 3 will be made official late next month (May 28).

2.1GHz, it should be 2.15GHz or is it little underclocked