Samsung is about to launch its AI assistant Bixby along with the Galaxy S8/Galaxy S8+ announcement on March 29. It's somewhat limited at this point though as it only speaks and understands English and Korean. According to new info from Samsung's German website however, it will also gain German support by the fourth quarter of 2017. 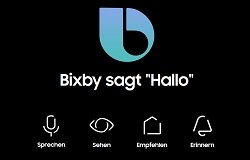 On Samsung’s German website a question about the availability of Bixby in the European country was asked. The company answered that the full functionality is expected in Q4 2017. This means the AI assistant will understand more languages and probably will even have a broader range of capabilities.

Samsung will probably have an Unboxed event for the Note8 at IFA 2017 in September. And with the phablet launch likely to come in Q4, it might bring the improved Bixby functionality along.

Jokes a side. Seriously speaking, the more languages, functions, speed, etc, the better it will be

To tell a joke, i will know that Bixby is the best virtual assistant in the world, when it will understand and speak my native language, Maltese. Haha