The mythical black Galaxy S III has been spotted couple of times in the past, the first time in Samsung's own Facebook pictures and the second time on a UK retailer's website. 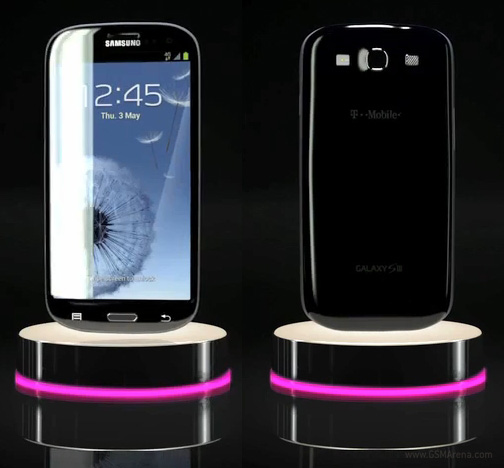 Now the phone has been discovered spinning on T-Mobile's website among other phones that the carrier has to offer in the same shade of black. This one looks a bit different and has a finish akin to the white Galaxy S III instead of the fake brushed metal finish of the blue version. Then again, this is a render and shouldn't be representative of the final product.

You will find the phone in the link below. Just skip the intro video that appears in the beginning.

I happen to like to s3 in black..... It has a sexy look that you wouldnt get with the blue or white. It will definatley turn some heads.

I got problem with GS3 lock screen. I can't get rid of AccuWeather and clock from display! The setting is located in the Clock menu Setting. I tried to switch off the Accu Weather and it's still showing on the Lock screen, It's annoying!

Pointless and a waste of money until Samsung decide to accept and resolve the CRACKING issue of the cheap plastic hardware......Treat your customers with decency!