If it's gaming-centric, it has to come with RGB LEDs - that's been the PC industry's mantra for years now and the Black Shark 2 follows along. It comes with LEDs around its sides, and also a LED-backlit logo on the over-designed back. 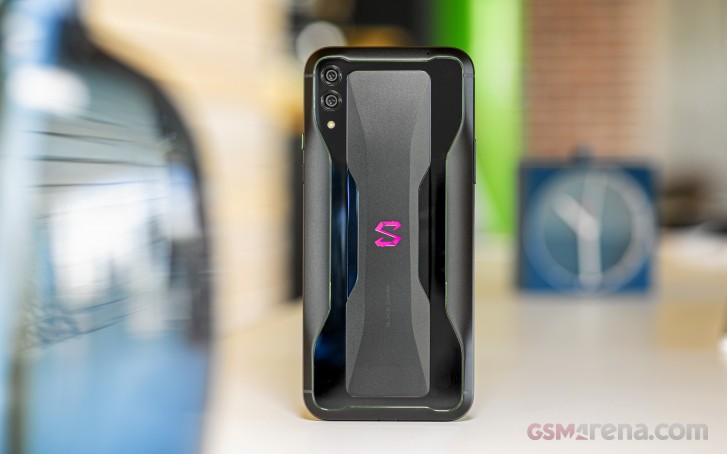 Of course, the centerpiece of the new Black Shark is its screen and the panel indeed looks promising. It has razor-thin bezels on the sides and finger-friendly strips on top and bottom. In addition to providing resting places for your fingers for those long gaming sessions the full bezels also mean there are no cutouts on the screens. If we don't count the rounded corners that is, but those are the norm these days.

Not quite as gamin-friendly is the Black Shark 2's 60Hz screen, which means it caps any content at 60fps. High-refresh rate screens are one of the key differentiator to gaming phones and even the mainstream OnePlus 7 Pro does 90Hz, so it's disappointing that the Black Shark 2 misses one. Admittedly, Android games that support 90Hz or 120Hz screens aren't that many, but if phones like this one doesn't provide the incentive to developers then who will. 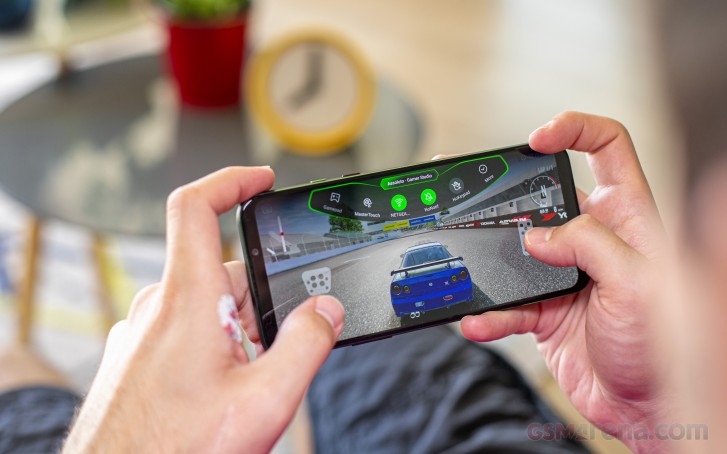 Xiaomi has partially made up for the lack of a high refresh rate screen with one of the best touch panels in the industry - within that OLED is a net of sensors with a report rate up to 240Hz for an extremely low touch input latency. And we could indeed feel it even in mundane Android operations - the instant responsiveness is a nice touch that many a flagship is missing.

The top bezel houses a couple of sensors, the 20MP selfie shooter, and a thin grille for the earpiece, which also doubles as a speaker. There is a symmetrical grille at the chin for the second speaker. Xiaomi promises excellent loudness and quality and we'll make sure to check those claims in a bit. 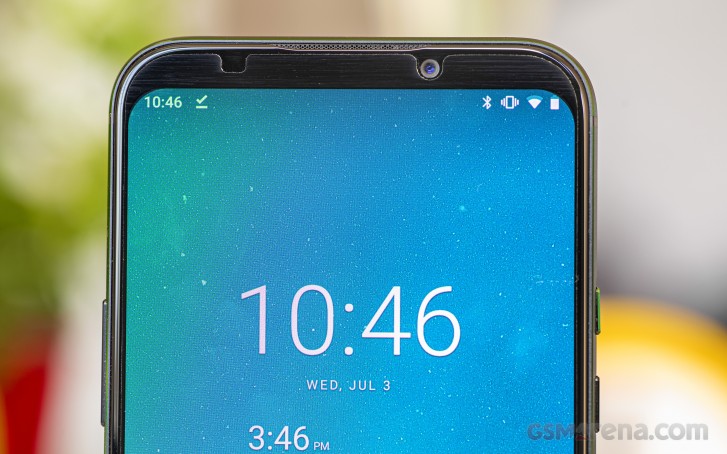 There is also an optical under-display fingerprint scanner around the bottom of the screen. It seems to be the same sensor used on the Xiaomi Mi 9T, meaning it's blazing fast and very accurate - almost as good as the conventional ones and we can only praise its performance. It works even through the smudge-covered screen protector, too. 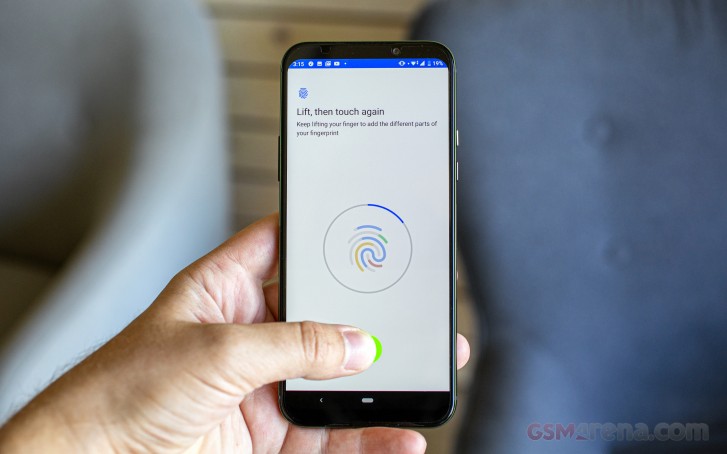 The Black Shark 2 also features an excellent taptic engine that comes close to the ROG's. It generates subtle yet deep vibrations on the exact places you tap, but also responds very well to compatible games.

The back of the Black Shark is an over-designed piece in typical gaming fashion, but it's very pretty in its own way. It's a single piece of frosted metal and it extends towards the screen to form the sides of the phone as well. The frosted finish is not that prone to fingerprints, very grippy, and adds for a nice softness on touch. 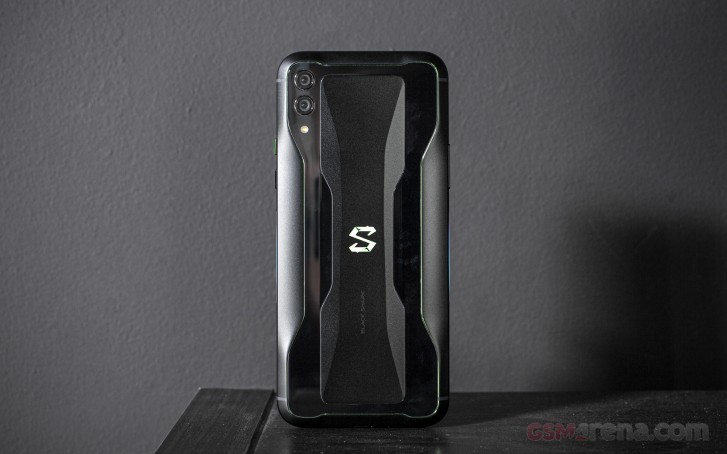 You've probably noticed the glass piece that interrupts the metal back. It boosts the industrial looks, sure, but it's also needed so the host of antennas doesn't interfere with each other.

At the center of the X-like glass is the illuminated S-logo. Just like the side LED strips, its light is highly customizable - you can choose patterns and colors and whatnot.

The two cameras on the back are protruding slightly - rather odd given that the Black Shark 2 is 1.2mm thicker than the Mi 9 from which it borrows them. The top one has a 12MP sensor behind f/2.2 telephoto lens for zoomed photos, while the regular snaps are shot with the bottom 48MP snapper that's behind f/1.75 28mm lens. There is no optical stabilization available on either of those. 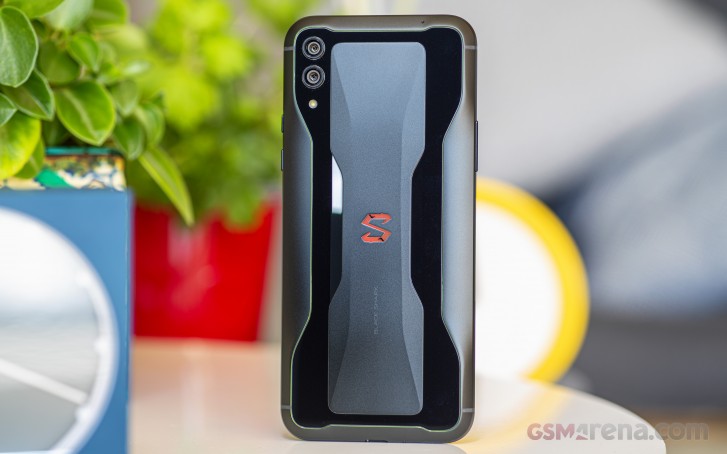 You've probably noticed the green accent visible around the glass. It is also painted over the chamfered edge around the screen and while it is just a static paint, it reacts somehow to ambient light and looks like it's flashing. It's really cool and we thought for quite some time that actual LEDs are involved before we discovered that's it's just cool reflective finish. 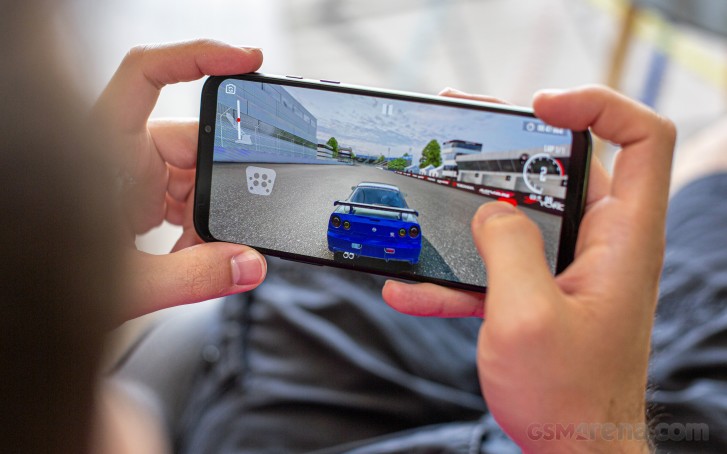 Also, we want to praise Xiaomi for taking the extra step and protect the rear glass piece from scratching. The metal at the center of the glass is bulging just enough to prevent the glass from touching your desk or table.

The handling of the Black Shark 2 is great. The frame is part of the single frosted metal piece that covers the back though is a double chamfer. The frosted finish is best for grip, while the rather sharp edge between those two chamfers makes it feel even more secure in hand.

Then there are the two RGB LED strips on the longer sides of the frame. Those can be used for notifications and low battery reminder, they also flash dynamically during music and video playback, and the most important - they do the same during gaming. You can choose between various patterns and colors in the LED settings, or you can opt out of some or all triggers. 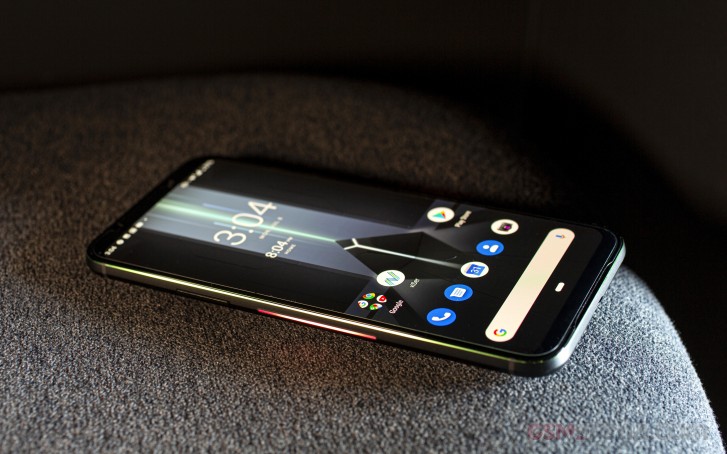 The left side of the Black Shark 2 has only the volume rocker and one of the LED strips. The bottom is where the dual-SIM and USB-C slot are. On the right you'll find the other RGB LED, the power key, and a special switch for the so-called Shark Space. It's a dedicated game launcher and this hardware slider is the only way to enter and exit the Shark Space.

The Black Shark 2 measures 163.6 x 75 x 8.8 mm - about 5mm taller than the Mi 9T, which has the same 6.39" OLED and 4,000mAh battery, and those extra millimeters come from the bezels. The Shark weighs 205g, 14g heavier than the Mi 9T, probably due to the metal back and the advanced copper and metal cooling parts we are going to talk about later on.

The Black Shark 2 is one very solid smartphone - not the most convenient for carrying about, but arguably the perfect size and shape for gaming. The lack of ingress protection and a 3.5mm jack are our main gripes with its design, but overall we are pretty happy with what it is.