The Black Shark 2 shares the 6.39" diagonal of its AMOLED panel with the Mi 9 and Mi 9T. It is a gaming phone, so a cutout of any kind would have been a huge blow to usability, but with a full bezel there was an easy way around that. 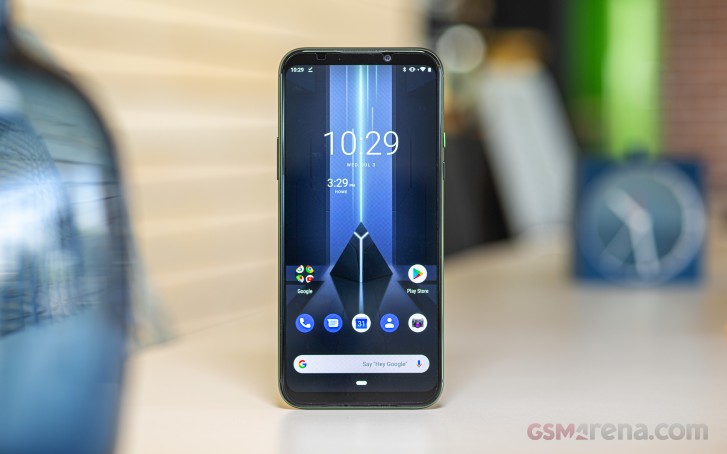 In the abscence of high refresh rate or extra high resolution, the only screen treat that the Black Shark 2 gets is the 240Hz touch input. It lowers the touch latency and the phone feels more responsive than a bunch of recent flagships including the Mi 9 series, which have the same panel underneath It's not a big difference, but it's there. The iPhones have had 120Hz touch input for a while, and we can compare the Black Share 2's responsiveness to X and XS.

The measurements we took on the Black Shark 2 screen match those of the Xiaomi Mi 9T. The maximum brightness you get in manual mode is 430 nits and there is a sunlight boost switch for the Auto brightness mode, which lets you go to 620 nits.

The screen could be very dim, too, with just 1.8 nits of minimum brightness.

The Natural Contrast corresponds to sRGB and we recorded an average deltaE of 4.7 for the color accuracy, meaning it's slightly worse but still fine in the grand scheme of things.

The third one is the Eye-care mode, which limits the blue hues and is best for nighttime and when planning to read text on the phone for long periods of time.

A so-called True View option is available, too, and it's similar to True Tone on the iPhones. It optimizes the colors and contrast depending on the surrounding light.

The Black Shark 2 also comes with a proprietary video enhancer (lifts video frame rate) and a separate option for SDR to HDR upscale, when possible, but those are of very limited use at best.

The Black Shark 2 is powered by a beefy 4,000 mAh battery. It supports both Quick Charge 4+ and USB-PD and the phone comes bundled with a proper 27W charger. It refills 65% of a dead battery in 30 mins, while it takes about 100 mins for a full charge - both solid achivements.

The Black Shark 2 posted an excellent endurance rating of 93 hours and achieved great scores across the board. The screen-on-times are 12 hours of web browsing and 17 hours of video playback. Note that we tested the video playback with the default enhancer on (Super Cinema Mode), but left the SDR-to-HDR upscaler off. 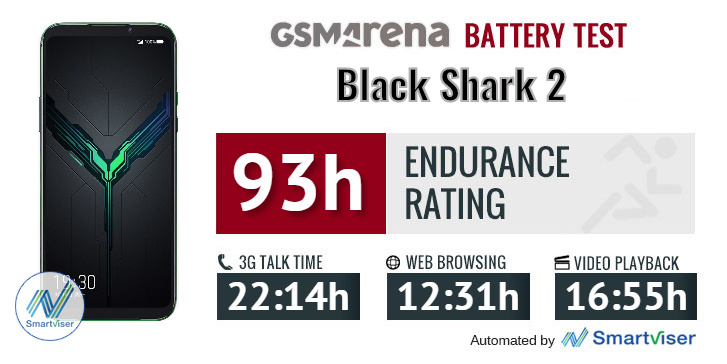 Our battery tests were automated thanks to SmartViser, using its viSerDevice app. The endurance rating above denotes how long a single battery charge will last you if you use the Black Shark 2 for an hour each of telephony, web browsing, and video playback daily. We've established this usage pattern so that our battery results are comparable across devices in the most common day-to-day tasks. The battery testing procedure is described in detail in case you're interested in the nitty-gritty. You can check out our complete battery test table, where you can see how all of the smartphones we've tested will compare under your own typical use.

The Black Shark 2 has front-facing stereo speaker behind two grilles on its shorter sides. Naturally, one of these also acts as an earpiece, and as it happens more often than not nowadays, it is not as loud as the bottom one.

The top speaker is better at the high notes, while the bottom one has deeper bass, so some balance is eventually achieved. And depending on how close to your face the phone is the uneven sound may or may not bother you too much. 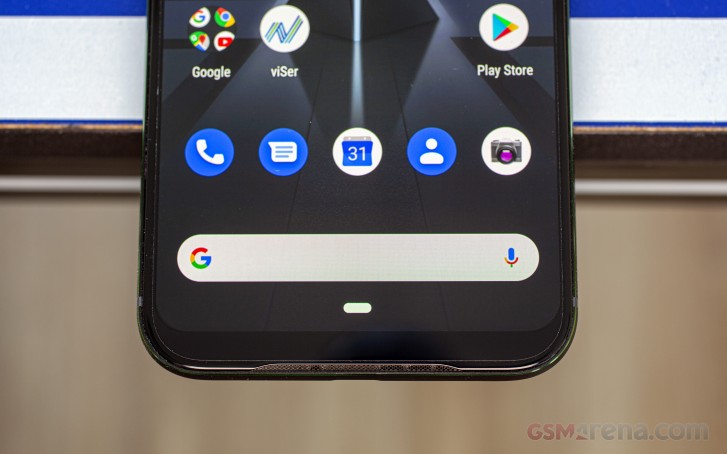 Xiaomi says the Black Shark 2's speakers are 25% larger than the standard smartphone speakers and should be more powerful. We are not sure what constitues a "standard" smartphone, but the setup scored a Very Good mark in our loudness test, some way behind the best we've seen.

The Xiaomi Black Shark 2 did very well in with an active external amplifier, posting the expected perfect scores for clarity, while still maintaining a high loudness to its output.

Plugging in a pair of headphones dropped the volume to average and added a moderate dose of stereo crosstalk. Some intermodulation distortion appeared as well although that would hardly be noticeable in real life usage. Still, the second part of the test hardly won the Black Shark 2 any bonus points.