The Xiaomi gaming division Black Shark introduced two new phones on Tuesday and opened a form right away so people could register their interest. In just two days the Black Shark 3 and Black Shark 3 Pro gathered the astounding number of 5 million registrations. 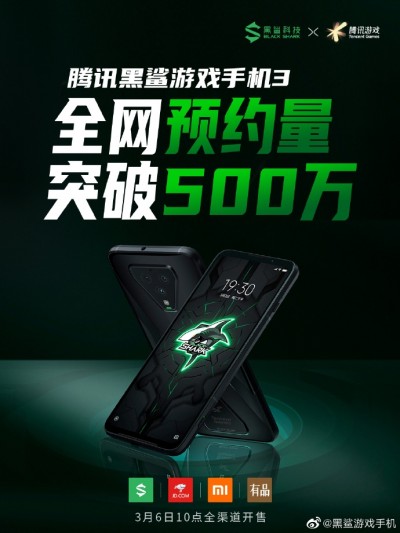 Obviously these aren't hard pre-orders and no money have changed hands, but it's still indicative of the public interest in the new gaming phones. Odds are that the first flash sales won't last more than a few minutes.

The Black Shark 3 comes with Snapdragon 865 and 5G connectivity, as well as up to 12 GB LPDDR5 RAM. There is a 6.67” screen with Full HD+ resolution and 270 Hz touch sampling rate, as well as 65W fast-charging capabilities. The starting price is CNY3,499 ($500) and the phone will launch tomorrow.

The Black Shark 3 Pro has a bigger screen, physical shoulder buttons, a bigger 5,000 mAh power cell, and a heftier price tag - CNY4,699 for the base 8/256 GB configuration. Its launch date is March 17 - both phones will be available at JD.com, Xiaomi’s own stores (the Mi Store and the Black Shark online portal) and some offline retailers.

Smartphones have legs? Wheels? You're a joke

Although 99% of what you said is true, there IS such a thing as mobile gaming. Proudly made for the insane to milk them as you say;-)