Back when BlackBerry 8520 was announced, it was supposed to hit T-Mobile first with Vodafone availability being pretty much a rumor only (though a quite reliable one). Well, the new 3G-less BlackBerry has just made its appearance on the Vodafone UK webpage so guessing stops here.

The Vodafone UK online shop lists the BlackBerry 8520 as free on select Pay Monthly plans (starting from 25GBP) if you sign an 18 or 24-month contract. 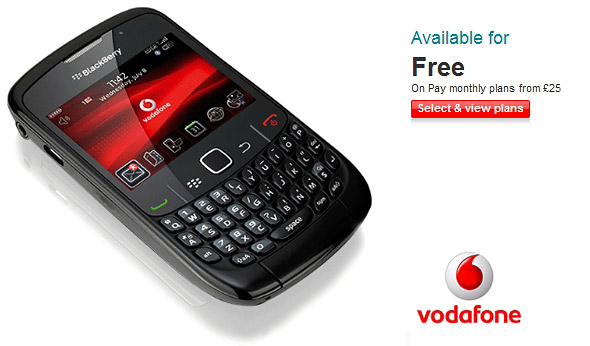 The new BlackBerry 8520 surely doesn't have 3G/HSDPA functionality, but it's got Wi-Fi connectivity to compensate for that. The 2.6-inch display and the sleek design are also attractive.

BlackBerry should have gone with a better camera we guess, as the 8520 has a 2 megapixel snapper only.

Another unusual thing about the BlackBerry 8520 is the optical trackpad that's used for navigation around the interface instead of a trackball.

BlackBerry Curve 8520 is the first RIM device that will be able to sync to your iTunes multimedia content and playlists. The release of the new version of the BlackBerry Desktop Manager in September will enable that kind of functionality for the rest of the company's product line.

Good handset....i Like This handset . But i Can not Delate Other persoans Email id is Updat.i want to Delate His Email ID ..But not to Deactive So I want to help.>>>..... handset Future is Best .... i Like Blackbarry handset ..