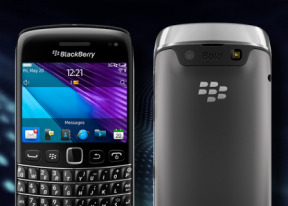 Oh, look - it's another BlackBerry Bold! But what's the catch? And where is the difference really? Sure it looks a bit smaller than the 9900 but it's the same QWERTY / touchscreen combo. So far, so good.

Now, let's play spot the difference. The Bold 9790 is powered by a different processor and HD video is one of the first things scrapped. To make amends, the phone has what's probably the best BlackBerry still camera to date. Both the screen size and resolution have taken a cut but we haven’t told you the best part yet. The Bold 9790 looks no worse than the Bold 9900 and costs less.

Now, the BlackBerry Bold 9790 is merely the next-in-rank. It doesn't have the premium features of the flagship but it makes sense as a potential replacement of the year-old Bold 9780. What it does is add touchscreen to a classic package, aiming to keep the BlackBerry experience up to date.

The 9790 is part of the premium Bold line but comes across as more mindful of budget than your average high-end BlackBerry. It pretty much does the same job as the flagship but charges less and is not without charms of its own.

The Indonesian debut of the BlackBerry Bold 9790 reveals something about RIM's market strategy. It makes sense for the 9790 to stay out of the Bold 9900's way and focus on emerging markets instead. Not that Indonesia is technically one - it's one of RIM's strongholds. On the other hand, the Bold 9790 did need a strong start and a launch at a traditionally loyal market was supposed to give it just that.

Anyway, we're about to see what a smaller and friendlier - though less powerful - version of the flagship can offer. And to whom. Follow us on the next page where the Bold 9790 feels just as good as the 9900, if not better.

This Phone Its One Of The Best Phone That I Have Ever Used 16gb Inbelt 512ram But The Only Problem Its The Battery That All Why The Battery?

9790 is definitely one of the best phones ever. Internet is fast when on 3G, flash for video and camera, great battery life, awesome sound and radio reception and no problem when putting a memory card, over 16GB. Watching movies is also amazing. Bo...