BlackBerry CEO John Chen has confirmed in a TV interview that his company is in fact working on a new smartphone that will have a physical keyboard. Once a staple item in any BlackBerry design, the physical QWERTY keyboard has been missing from both of the company's most recent handsets, the DTEK50 and DTEK60. Those are full-touchscreen designs.

Chen unfortunately didn't detail this upcoming smartphone at all, not even mentioning whether it will adopt a candybar form factor or if it's going to be a slider like the Priv. That said, such a phone has been rumored for quite a while now, and the rumors talked about it being a 'classic' BlackBerry design, sans sliding mechanism. 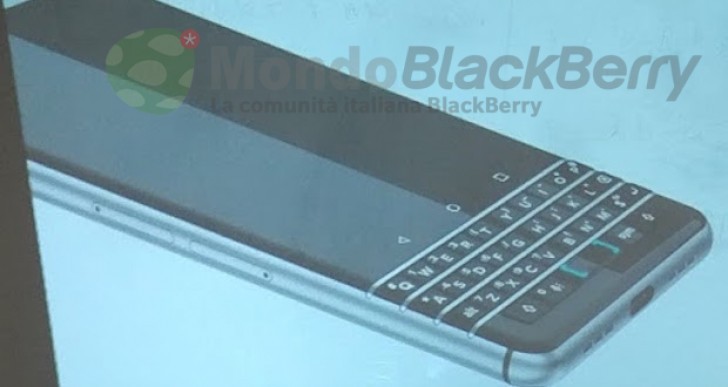 It's supposedly got the internal codename Mercury, and it might end up looking like what you see in the image above. The phone is said to come with a 4.5-inch Full HD touchscreen with a 3:2 aspect ratio, a 2 GHz octa-core Qualcomm processor, 3GB of RAM, 32GB of storage, an 18 MP rear camera, an 8 MP selfie snapper, and a 3,400 mAh battery. It should run Android 7.0 Nougat from day one.

Like the DTEK50 and DTEK60, both of which are actually made by Alcatel parent company TCL, the Mercury too will probably not be a BlackBerry product, but one created by a partner. That partner company would then be licensing the use of the BlackBerry brand and software suite on it. This is the new business model for BlackBerry, announced back in September.

Honestly BB please make this phone! And put some quality specs in it as well! I hate using on screen keyboards and I loved my BB10 phones but I also need apps! Since BB10 won't get apps I'd love it if you could bring the QWERTY keyboard back in the g...

RAM should be atleast 4GB and dual sim.

yep, it really is a pitty to pull the plug on it. If only it could have had 1-2 more years to run. With each newer android i'm less inclined to stay with it. Despite evolving in many ways i just don't like the direction the whole os's development is ...