It's not everyday you see the BlackBerry CEO talk smack about its competitors but that's what John Chen has been doing since Google announced it will incorporating Samsung's KNOX technology in the next version of Android. 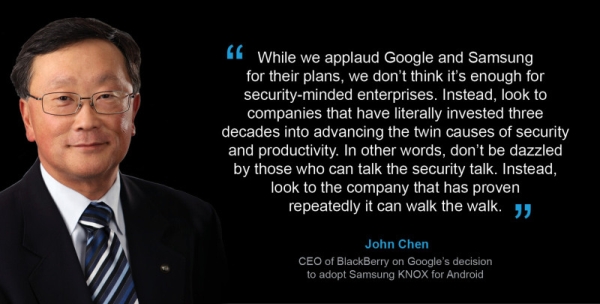 Chen wrote a long blog post, starting off with what Samsung and Google are doing (cool story, bro). After that he goes into how it's not good enough and then of course, how BlackBerry services are better (who didn't see that coming).

Chen's argument is that while KNOX is good, it runs on fewer devices right now whereas BlackBerry's service runs on several million devices since decades. He also lists all the accomplishments and accolades the company has received for its security features over the years.

It's obvious what is happening here. After having been beaten by its more modern rivals at everything else, the last thread that BlackBerry is hanging on to now to convince people it's still superior - Security - is also now under threat, with both Google and Apple strengthening their security features. Whether their version is superior or not we will have to see but there is no doubt at the rate which they are growing they would be able to overtake BlackBerry in this area as well.

For what it's worth, it's good to see BlackBerry fighting back, but it would be better if it did it through its phones rather than blog posts.

BB10 really is a nice OS and specially after the android app compatibility. i think Z10 any given time is a better phone than those plastic phones from Samsung. Its not about more ram or 50 cores its about how you design OS around a hardware.

Up to the end of the fourth paragraph of this "news" article, it was still news. Then, this, the 5th and concluding paragraph: "For what it's worth, it's good to see BlackBerry fighting back, but it would be better if it did it t...

You clearly sound like someone who has no idea...lol