The BlackBerry Classic features the best hardware QWERTY available on the market today. The 35-key backlit keyboard features the same design, layout, and tactility (BlackBerry execs call it "clickiness") as the company's most successful models - and it is a pleasure to use.

The keyboard is a joy to use

The available customizable shortcuts are another old BlackBerry trick, which will appeal to power users. The hardware navigation keys on the other hand, are made for older BlackBerry users who still refuse to convert to on-screen navigation.

Above the display is where the earpiece, the ambient light and proximity sensors, and the front-facing 2MP camera can be found.

A look above the display

Save for the QWERTY we told you about, there is nothing else below the screen of the BlackBerry Classic.

The nano-SIM and the microSD card tray slots are located on the left side of the phone. Each requires a tool to open and is conveniently labeled.

The left side of the device

The right side of the BlackBerry Classic is home of the volume rocker and the key for activating BlackBerry assistant. The latter is tucked between the volume buttons.

A trio of keys on the right

A power/lock key sits on top of the smartphone, joined by the 3.5mm audio jack. A duo of microphone pinholes are also part of the setup.

The top of BlackBerry Classic

On the bottom of the smartphone is where the microUSB port sits. It is flanked by two speaker grilles, but don't be fooled - BlackBerry Classic packs a single mono speaker. The other hides the main mic, which is used in calls.

The bottom of the smartphone

The back of BlackBerry Classic is a familiar affair. The smartphone's 8MP camera and its LED flash sit on the top left corner, flanked by a Classic sign on the right.

The back of BlackBerry Classic

The BlackBerry Classic features 2,515mAh battery, which is quoted as capable of providing up to 17 hours of 3G talk time and almost 14 hours of video playback. Standby is quoted at 15 days over 3G.

We put the BlackBerry Classic through the rigors of our battery test. The handset achieved the stellar endurance rating score of 62. This means that it will easily make it through almost three full days if you use it for an hour each of telephony, web browsing, and video playback daily. 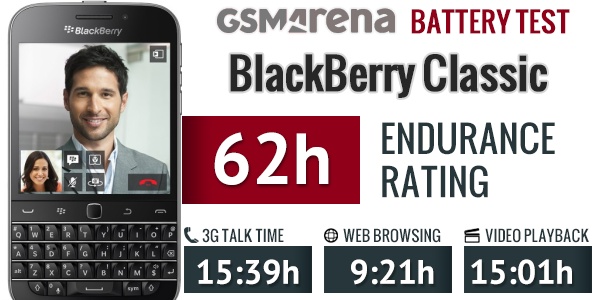 Our routine also includes a standby battery draw test, which is not featured in our battery endurance scorecard but is calculated in the total rating.

BlackBerry designed the Classic to be a world-wide business phone, so it is full of telephony options. It features quad-band 2G and quad-band 3G connectivity, alongside a load of 4G options including support for up to 7 LTE bands.

NFC is also on board, allowing easy exchange of data. You can use the dedicated app to create tags (e.g. a tag with contact info), which you can store to NFC tags or other NFC-enabled phones. The app also handles reading tags and storing the data for when you're on the receiving end.

You don't need NFC to transfer tags either - the Classic can create a QR code and read QR codes too, which is great for communicating with phones that don't have NFC.

You can also share the screen of the device with an HDTV using Miracast. Wi-Fi Direct is also on board.

While we're at it, we have to go over BlackBerry Link - the PC Suite for the smartphone. The phone has the install file for your computer, just plug it in and install the program. Once Link is on your PC, the Classic will appear as a drive on your computer. You don't even need a USB cable to transfer files - as it will appear as a network drive if it's on the same Wi-Fi network as your computer.

Link can schedule phone backups and automatic sync of content (both docs and multimedia). That's great with the Wi-Fi option - it will automatically sync your docs at work and then your music at home.

A similar yet more robust feature is BlackBerry Blend, which is also available on the BlackBerry Passport and BlackBerry P'9983, because they run OS 10.3. Blend allows you to use your device for sending and receiving messages, checking your calendar or accessing all its files without ever touching the it. Instead, you use your computer or tablet (iOS or Android) and do everything from there.

Both Link and Blend require a BlackBerry ID account.