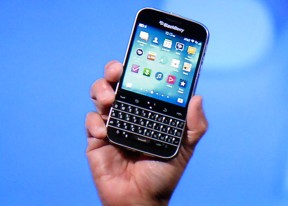 We captured a short video of the BlackBerry Classic in action. Despite its modest hardware, the smartphone feels incredibly fast and responsive thanks to the QNX-based BlackBerry 10.3.1 OS. See it in action below.

BlackBerry Classic isn’t revolutionary by any stretch of the imagination and this is arguably its biggest strength. The newcomer combines all qualities that once made its maker a powerhouse in the smartphone realm with modern functionality, headed by integration of Android apps.

A few minutes with the hardware QWERTY left us convinced that, as far as typing on a smartphone goes, nothing comes close to BlackBerry’s solution. The keyboard feels as comfortable and assuring as ever.

We are yet to find out if the BlackBerry Classic makes a strong case for itself as the only smartphone in your life. It makes perfect sense as a work tool, but not so much as an entertainment device. This should hardly catch anyone by surprise, as BlackBerry doesn’t want you to view its latest creation as such anyway.

Mainstream consumers are unlikely to be drawn towards the BlackBerry Classic. Corporate types with years of BlackBerry experience on the other hand might find it to be just what the doctor ordered. We will give you our full take on the handset in our full review, which is already under way.