BlackBerry Classic is now official with keyboard and trackpad

BlackBerry Classic has been teased quite a few times throughout the last few weeks. Its pre-order campaign even kicked off weeks before the premiere, for $449. The wait is over though, as the BlackBerry is now officially announced and launched. BlackBerry Classic is the spiritual successor of the best-selling BlackBerry Bold 9900. It packs a 3.5" 720p touchscreen covered with a Gorilla Glass 3 piece and runs on a dual-core 1.5GHz processor and 2GB of RAM (same as BlackBerry Z10). The rest of the specs include 16GB expandable storage, 8MP rear cam with a LED flash, and a 2MP front snapper. 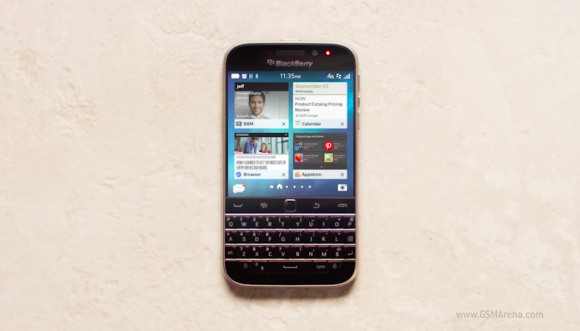 Of course, BlackBerry Classic's key feature is the four-row hardware QWERTY keyboard and the return of the traditional control deck revolving around a squarish trackpad. The smartphone runs on the latest BlackBerry 10.3 OS and supports native Android apps via the Amazon Appstore.

The BlackBerry Classic is available as of today worldwide. There are many supported carriers and retailers, so you'll have to check with your local sources. The contract-free Classic will set you back $449 in the USA. AT&T has also committed to offering the device although it's yet to detail it's on-contract pricing.

hi csn i used the viber voice in the 3g system

So, BlackBerry is seeking to mitigate its losses by changing direction and dominating a niche market... Well, good for them! As far as I can tell, it's working. There's no way they can compete with Apple, Samsung, LG, etc. directly under current cond...

I was just about to say that, if blackberry wants to come back fast they should've made this cheap to put off people from buying cheap androids from the east. $300 would've been perfect.