The BlackBerry Curve 9320 did quite well in our audio quality test. In the active external amplifier part, the smartphone produced some excellent scores and while its volume levels didn't impress, it still performed very well overall.

Even more impressively, there's was very little degradation when we plugged in a pair of headphones. Some intermodulation distortion and stereo crosstalk crept in, but the levels remained way better than most other smartphones out there (including some way more expensive than the Curve 9320). 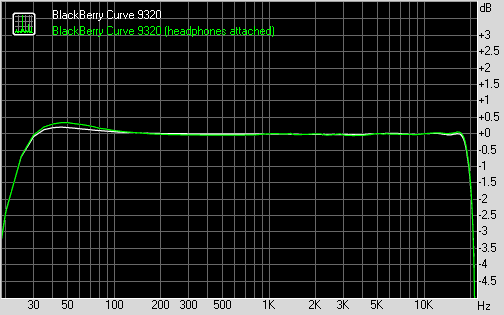 The video player on the Curve 9320 played almost everything we threw at it, with the exception of 1080p videos.

The landscape screen is a good start, and the video player itself isn't bad either. Its styling might not be too impressive, but the functionality is mostly there. There are the usual playback controls when you hit a key, along with a dedicated fit/zoom to screen button.

The Curve 9320 video player is said to support DivX, XviD, H.264/MPEG-4 and WMV videos up to 720p resolution. It managed to play all of the DivX files we threw at it, and WMV, MOV and MP4 files up to 720p were no problem either. Xvid videos with the AC3 audio codec played, but had no sound - while some Xvid videos refused to play altogether.

The image gallery hasn't changed since the OS 6, so it should be familiar to all BlackBerry users already.

Images can be browsed in grid mode or viewed as a standard list. There's search by name here too, but unless you take the time to name all of the pictures you take, that's not really an extra.

Photos can only be browsed in landscape mode, with the option to manually rotate them. Unfortunately the Curve 9320 has no built-in accelerometer to provide automatic rotation.

You can skip to the next photo without returning to the gallery - you just flick your finger over the trackpad and you can quickly browse through a slew of images. We were really impressed at the responsiveness of this gesture, as there's no delay while the hardware catches up.

Checking an image's properties, applying zoom, as well as starting a slide show, are all a menu key click away. Setting one of your images as a homescreen wallpaper is available too.

Picture browsing is pretty fast and so are zooming and panning. It would have been nice to use the volume rocker as a zoom lever, but the gallery is generally pretty good.