BlackBerry Keyone goes up for pre-order in Germany

The BlackBerry Keyone is now available to pre-order in Germany. Local retailer Media Markt has the device listed on its website for €599, with shipments beginning May 5. 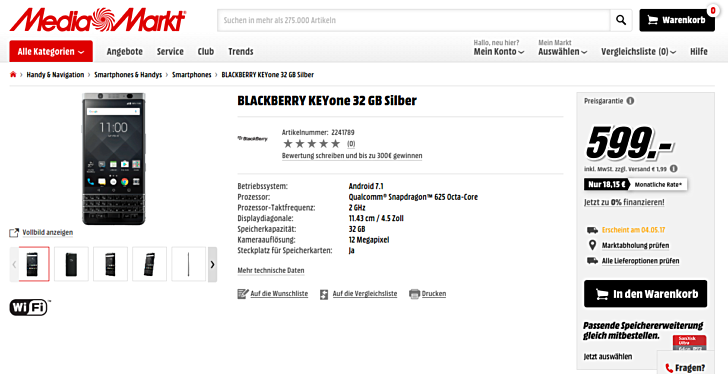 Earlier this month, the phone was spotted listed on an Indian retailer's website. The listing revealed an INR 39,999 (around $605) price tag, but didn't say exactly when it will be available to purchase.

Over in the UK, Unlocked Mobiles is currently accepting pre-registrations for the handset, while in Canada, major carriers have confirmed they'll be carrying the device.

I have never gotten this 'one hand' business. Obviously if you're doing that you're not paying attention to your driving, conversation, movie, or whatever else you're doing.

I have to agree with you...I'm a solid BB fan, still hanging on to my Z10 religiously. As much as i hoped for BB's success, I've cringed half a dozen times at their woeful efforts at marketing. Beginning with that embarrassing effort by the BB chief ...

Again, for those who still can't compare things properly, 1. BlackBerry offers monthly security updates, on par with Google itself. 2. It costs to produce a quality physical keyboard with capacitative touch 3. It costs to have a team harden ...