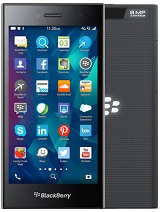 I thought BlackBerry will release a touch screen phone with the same specs as the passport.. now this is just a repetition of the Z30.. no wonder why they are not in the top10 anymore

OMG did they just water down a Z30 or what?
The display is identical and the processor is just as slow.
But then again, what do you expect for $275.00 ?
My guess is that it'll do okay for an entry level device though.

It's time Blackberry bowed out gracefully. Dedicated devices are no longer on the menu, (were they ever) lol.

Sunil, 03 Mar 2015What is the difference between Blackberry Z30 and Leap?The diffrences bw z 30 and leap are prices .or nothing

A nexus 4 (specs) wrapped in blackberry body. But S4 chip is good enough i think.

Just terrible.
We want something like this, Blackberry OS deserve something gorgeous and good looking ..like this http://forums.crackberry.com/blackberry-concepts-dream-devices-f417/z30s-big-brother-z40-my-new-concept-946534/
About this phone? Really really bad bad bad move ...stupid as they can be.

I don't think this would be iPhone 6 killer or could sell more than iPhone 6.

Sunil, 03 Mar 2015What is the difference between Blackberry Z30 and Leap?z30 amoled panel leap lcd panel

Sunil, 03 Mar 2015What is the difference between Z3 and Leap?Almoust: NONE!

Like Samsung they(BB) must to produce more than one phone/target market.

Apple's iphone 6 and 6 plus uses the A8 chip which is only a dual core processor and 1.4ghz but the performance is on par with the Note 4 that uses the Snapdragon 805.

same with Blackberry 10 OS. it doesn't need octa core or quad core to run smoothly. a dual core processor is more than enough added by 2 gigs of RAM.

spec sheet doesn't mean anything much because there are a lot of things to consider when inspecting a phone's performance. such as the software (OS, App optimization, etc) what most of you guys are looking at is just from the hardware perspective, you need to look at it as a whole and not just before.

this isn't a rant, it's just my two cents because a lot of people are using Android base smartphones Specs as the standard in the smartphone industry. but it's not

Why no gyro and NFC!

Pros:
microSD support up to 128 GB

xz, 03 Mar 2015very bad design"Design" or beauty is in the eye of the beholder. But if you are saying this to badmouth blackberry, then care to elaborate why it is "very bad design."

Blackberry's OS is a powerfull OS and Blackberry leap is with newest upgrade with blackberry blend,blackberry assistant etc.
Wating for it

Total of 791 user reviews and opinions for BlackBerry Leap.
ADVERTISEMENTS

Bouncing up and down
BlackBerry Leap review
ADVERTISEMENTS