BlackBerry London leaks out in a single picture, raises questions

It is no secret, that RIM is going through difficult times these days. The Canadian company's recently announced BBX platform is expected to change its current state of affairs for the better by (finally) integrating BlackBerry OS and QNX.

Today, we have the first leaked shot of a BlackBerry device sporting the new OS. Dubbed "London", the smartphone is likely to become the company's flagship sometimes next year. 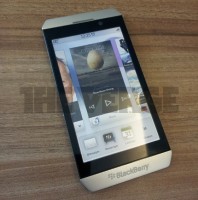 In terms of specs, the handset reportedly packs a dual-core TI OMAP CPU, clocked at 1.5GHz and a gig of RAM. The expected built-in storage is 16GB. An 8MP camera is on board, accompanied by a 2MP front-facing unit. The device is rumored to be thinner than iPhone 4S.

While we were preparing the news for you, another report popped up on the web, confirming the existence of the above shown BlackBerry. Q3 of 2012 is expected to be the launch time for the device.

Since we are talking rumors here, we advise you to take all the information with a tiny pinch of salt. As always, we will keep you posted on any developments on the subject.

Hm, they better have Phoenix abilities with what I read. May not help. Robert Lichota

which is why android 4.0 is being release to fix fragmentation. Just because os does not match doesnt mean its outdated. Android os can easily be updated to most current via custom rom and rooting. Get your facts straight.

The article says that there is a 2MP front-facing camera apart from the 8MP at the rear.