As BlackBerry continues to release BlackBerry hardware, the company is slowly reestablishing itself in the smartphone industry. Even in the beginning of 2018, we still encounter a large number of people who don't know that BlackBerry is relevant again.

We can't blame them since BlackBerry hasn't been spending excessive amounts of money on advertising. Maybe those who have seen the BlackBerry KEYone in carrier stores might somewhat remember they saw a BlackBerry "in a store that one time". 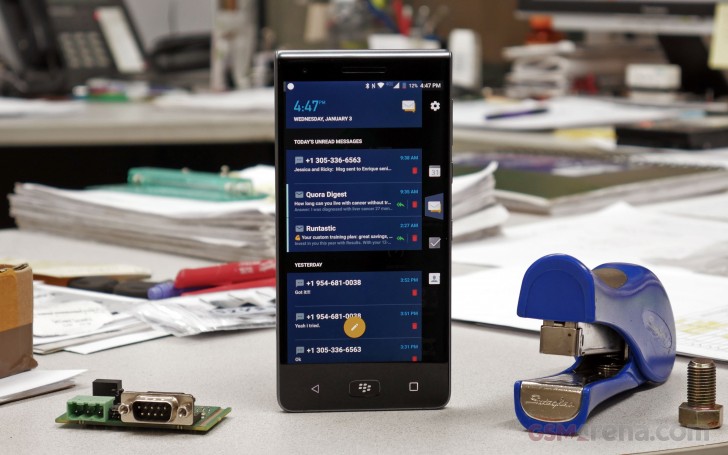 Brand recognition aside, the BlackBerry Motion has a standard set of hardware: A Qualcomm Snapdragon 625, 4GB of RAM, and a 5.5-inch Full HD screen. The BlackBerry Motion does stand out in a couple of aspects: it has a large 4,000 mAh battery, and it is IP67 water resistant. We're glad to see that the BlackBerry Motion's hardware is pretty sharp-looking and instantly recognizable among a selection of smartphones that already look very similar.

The phone's software is just as important as its bold-looking exterior. BlackBerry's software on the Motion is very similar to how it was on the KEYone - only with a fully virtual keyboard rather than a physical one. BlackBerry's formula for software is a near-stock version of Android, enhanced with BlackBerry's productivity-centered suite of apps and security-focused approach for handling sensitive data.

We're not as excited about the BlackBerry Motion as we were about the KEYone. After all, there aren't too many new phones that come with a full QWERTY keyboard these days. The BlackBerry Motion is ultimately the successor to the BlackBerry DTEK60, a phone that came with a high-end processor to let it stand out. There are, however, a plethora of devices that fit the same base formula of a Full HD 5.5-inch screen and a mid-range processor.

Let's find out together - starting with the phone's unboxing and a quick tour of the hardware at hand. Is the BlackBerry's price premium worth more over these cheaper options?

Where can we buy BlackBerry phones in Namibia?

I've owned many BB devices before until BB Priv. Like many BB fans, I have wished for higher end devices but never get ones nearly half decent. It's time to ditch BB for others, especially BB devices are no longer made by BB. It's sad to see the home...