BlackBerry N-Series smartphone shows up in a live photo

Only a few days after its touchscreen sibling made a couple of appearances, RIM's BlackBerry N-Series smartphone emerged in a duo of live photos. The soon to be revealed BlackBerry 10 smartphone packs a hardware QWERTY keyboard in addition to its capacitive touchscreen. 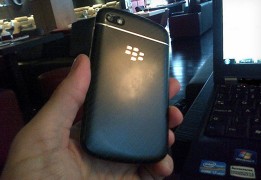 As you can see in the photos above, the BlackBerry N-Series looks a lot like the currently offered Bold 9900, save for the lack of navigation and menu buttons, which have given way to a larger screen. The QWERTY appears to be unsurprisingly well-made and comfortable, so the BlackBerry purists should have a good reason to look forward to the device.

The BlackBerry N-Series is all but certain to launch alongside the BlackBerry Z10 on January 30 in New York City. We will update you should we hear more about the upcoming device.

I agree that Blackberry loyal users have stayed because of the soft physical qwerty and allocated keys for call/end/menu/return plus the trackpad because it's a phone first. I still would mainly use a trackpad, even on the touchscreen 9900/9930 mode...

I agree. Removing those buttons is one the most retarded mistake to do. Too many phone manufacturers do that mistake these days. Thats why Im still a nokia n95 8gb user.

Who is we maybe its only you? Looking forward to these new berries