The new BlackBerry OS 7 listed browser improvements as one of its major selling points. Some benchmarks from RIM show impressive results – the browser bests Mobile Safari and the Android Browser at JavaScript and page loading times.

Tests were run on the new BlackBerry Bold Touch 9900, which went head to head with the iPhone 4, Google Nexus One and Nexus S. An old BlackBerry running the BB OS6 with the old web browser was used as well.

The new browser in BB OS 7 loads pages 1.6 times faster than the one in the previous version – 7.8 seconds to load a page on average versus 12.4 seconds for the old version. Panning and zooming is much faster too, says RIM though they didn’t provide numbers for that. 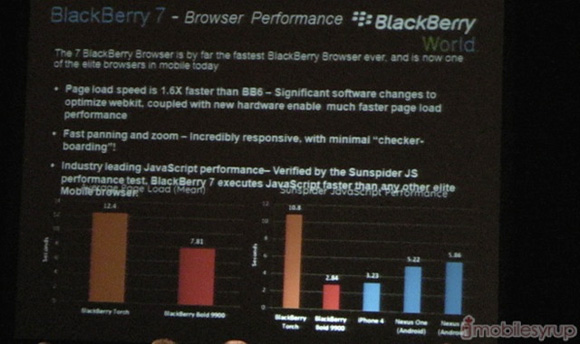 The JavaScript engine, which got a JIT compiler, flew past the mobile browsers on iOS and Android. The BlackBerry Bold Touch 9900 ran the Sunspider benchmark in 2.84 seconds (lower is better), while an iPhone 4 passed it in 3.23s, the two Google droids posted times between 5 and 6 seconds and finally, the BlackBerry OS 6 browser did it in 10.8 seconds.

Of course, what RIM neglected to mention is that all things equal, the Bold Touch 9900 has a 20% advantage in pure clock speed – its Qualcomm CPU runs at 1.2GHz, while the rest of the competition have their run at 1GHz (and the old Berry runs at much lower speeds of course).

Still, the results are very impressive and hands-on reports say that the browser is lightning fast in general, not just in JavaScript benchmarks.

This os7 BB is very good ....I think this O.S7 realy bets android,or any phone browser....

Will flash support be available already?