3 megapixel shooter not helped by the interface

The BlackBerry Pearl 9105 is equipped with a 3 megapixel autofocus camera and a LED flash. Just judging by numbers alone you can tell that it’s not the going to produce mind-blowing images but the fact is that there’s only one BlackBerry to feature a better snapper (no prizes for guessing which one).

To call the camera interface basic will be a vast understatement. It only offers a very limited number of customizable settings, including white balance, color effects and digital image stabilization. There is also the obligatory picture size and quality and storage media.

Accessing those few options is pretty uncomfortable too. There are no shortcuts on the screen meaning that you have to dig in the menu. All you can do from the viewfinder is zoom in and out with the trackpad.

Which, we dare say, is more of an inconvenience than an extra as we often ended up zooming when trying to take a photo.

The camera key too isn’t ideally located on the side considering that you’ll do most of your shooting holding the phone vertically as the camera sensor orientation dictates it. The trackpad is quite suited for the purpose of a shutter key in this position but it takes the fun out of the auto focus as it lacks the ability to pre-focus.

The best thing we can say of the otherwise really poor camera software support is that there is image-geotagging. This means that you can easily record your location in the images EXIF data.

That aside, the image quality of the BlackBerry Pearl 9105 is quite good for the 3 megapixel league. The amount of resolved detail is nice and the luminance noise is not really bothering. Chroma noise is absent in daylight pictures or at least well concealed.

Contrast is really ok. The only downside of the camera is the inconsistent white balance producing various color shades ranging from warm to cool regardless of the shooting situations. Hopefully that will be fixed in some future software update since it's really critical for the camera performance.

Like most BlackBerries, the BlackBerry Pearl 9105 is hardly a phone you will consider if photography is your thing, but it might just do the trick if you use it to take the occasional contacts photo.

We also snapped our resolution chart with the BlackBerry Pearl 3G 9105. You can check out what that test is all about here. 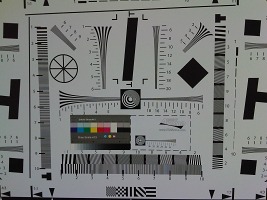 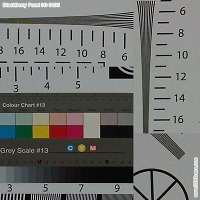 Back in the days when VGA was all the rage, BlackBerry handsets were recording QCIF videos. It took them a good few years to reach the VGA summit and the Pearl 3G is one of the first RIM devices there.

The camcorder is not much better either

The thing is the world is now moving towards HD recording so VGA is not going to impress anyone. The high compression doesn't help things much.

Videos are captured in 3GP format and you can apply various color effects to them. The LED flash can also be set to work as a video light.

As most of its newly released siblings the BlackBerry Pearl 3G 9105 gives you all the connectivity you might need and manages it pretty nicely too. Luckily the times of picking your connectivity priorities with those Berries are long.

The quad-band GSM/GPRS/EDGE support secures global roaming and the 3G with HSDPA gives you the extra speed. The Wi-Fi is also present with a highly customizable (but again painfully ugly) Wi-Fi manager taking care of all the connections. Bluetooth with A2DP support rounds off the list of wireless connectivity options.

The BlackBerry Pearl 9105 is also equipped with a standard microUSB port that is enabled for both data connections and charging. Once connected, you can sync your data with the mobile phone including your iTunes collection, save for the files that have DRM. You can even use the handset as a tethered modem.

Finally, you have the option to use your microSD memory card slot for file transfers.

The trackpad really counts in browsing

The web browser on the BlackBerry Pearl 9105 is certainly one of the best we have seen among non-touch, non-QWERTY phones. Good software and precise trackpad navigation add up to a pretty good combo. Panning is great thanks to the trackpad and the virtual mouse cursor.

Page rendering is near perfect displaying almost every page like on a desktop computer. The high resolution display is another welcome bonus here as it allows more content to fit on the screen.

Checking out the Torch review on the Pearl 3G

By default, pages are loaded to fit the display width with the virtual cursor taking the shape of a magnifier. You then just click on the part you would like to read and it gets zoomed in to fill the screen. A press on the back key and you are back to the fit-to-width view.

In fact the only bad part about the web browser of the BlackBerry Pearl 9105 is the lack of proper Flash support. Other than that, the handset provides probably as good an experience as you might have hoped.

Living up to its business reputation the Pearl 3G 9105 offers a good set of time-management apps. Looks are again counting against it here, but usability is what matters most.

The calendar has monthly, weekly and daily view modes and allows largely customized events to be set up. We have to admit that some event presets would have been useful but sadly the device fails to provide them.

Calendar entries can also be forwarded and conference call information can be merged into the Calendar.

Mobile office is also fully functional, with preinstalled applications able to open Word, Excel and PowerPoint files. You can also get a free app for handling those PDF files.

Mobile office does editing too

Document editing is also supported right out of the box just as BlackBerry users are used to. However if you want to create a new document you will have to go for a paid upgrade, which is a bit puzzling. Well, we guess it won’t hurt copying a few empty doc files to your memory card instead.

The organizer package also includes a calculator with a built-in unit-converter, as well as a voice recorder and a Notes application. A handy To-do manager allows you to set-up and organize your upcoming tasks.

The alarm application has only one alarm slot and fails to impress. It's quick to turn on but most of its settings can only be adjusted from the settings menu. There you can change the tone, snooze time and the volume as well as the vibration intensity.

The alarm app only offers a single slot

The clock also offers a bedside mode that turns off the status LED (unless you set it otherwise) and displays a large clock on the screen.

Next, the BlackBerry Pearl 3G 9105 comes with a stopwatch and a timer. Both are accessed from the clock application and have the usual functionality.

The timer and the stopwatch

Finally there’s the usual password keeper that allows you to keep you valued passwords safe in case your Pearl 3G falls into the wrong hands.