BlackBerry reported the financial results for the quarter that ends June 1 and there's some good news and some bad news. The company saw an uptick the two previous quarters, but this quarter ended with an operating loss of $84 million.

The report doesn’t tell how many BlackBerry Z10s were shipped, the previous quarter it was 1 million). The Z10 was the sole shipping BlackBerry 10 product, but this quarter it was joined by the more affordable, QWERTY-equipped Q10. The lower-end Q5 launched at the beginning of the next quarter in the shifted fiscal year of the Canadian company. As for BlackBerry's sole tablet, the PlayBook, it shipped 100,000 units.

BlackBerry expects to continue losing money over the next quarter too, but the company will continue its cost cutting efforts and focus on the BlackBerry 10 OS, Enterprise Service 10 and BlackBerry Messenger.

Update: Uh-oh. Investors didn't react kindly to BlackBerry's financial report and the company's stock took a massive beating - it's down over 26% at the time of writing. 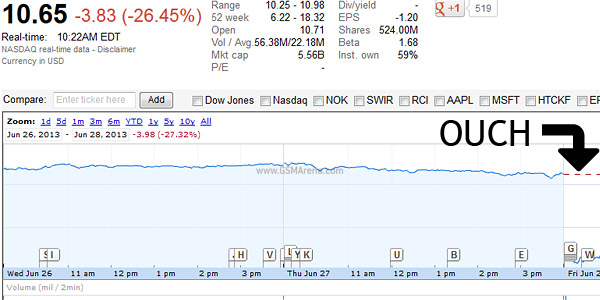 i'm a blackberry user and i like the blackberry so much but my advice to RIM company is : 1. the price of the device is always high for ex: the price of 9220 in Egypt is 1200 Egyptian pound ,although i can buy a Samsung mobile with more feat...

Blackberry should adopt Android as its platform to stay afloat. Me say that. Lol. Hahaha...