There and back again

BlackBerry Q10 review: There and back again

At first sight, the QWERTY keyboard is the trademark BlackBerry setup, with keys ergonomically sculpted for great tactility, although crammed up a bit too tightly. The keyboard layout, including the numpad and the secondary functionality is generally the same as in previous BlackBerries.

The QWERTY keyboard couldn't been better

The rows of buttons have been straightened out - a styling that kinda reminds us of the Porsche redesign of the Bold Touch 9900. This time around, the absence of a trackpad and navigation controls was what dictated the design decision.

The traditionally curved rows of buttons would've left an unpleasant amount of unused space between the QWERTY keyboard and the screen. Though in hindsight, it may've made sense, allowing a proper starting point for swiping up from the bottom of the screen.

As things stand now, the swipes need to start at the top keyboard row, which results in occasional unwanted key presses. It's not terribly annoying though and nothing that cannot be mastered with some practice.

The best thing about the keyboard is that it works with the touchscreen, rather than being at odds with it. With plenty of shortcuts available, some of which should be familiar to experienced users, the keyboard can seriously speed up getting around the interface.

Instant Actions makes the right kind of difference too, letting you launch apps and perform tasks using search as you type interface. But more on that in the software part of this review.

Now let's explore the rest of the BlackBerry Q10 controls. Above the screen, we find the traditional notification LED, proximity sensor and the earpiece. The front facing camera is a first for BlackBerry in the messenger form factor. The one on the Q10 is a 2MP unit that can do 720p video.

The left side of the handset is in charge of connectivity, with standard microUSB and microHDMI ports.

The microUSB and microHDMI ports

The right side of the BlackBerry Q10 features the volume controls, with a small pause/mute button squeezed in between. The convenience key, another token of the old days, is gone along with the trackpad and call buttons.

The volume controls and the play/pause key between them

The 3.5mm audio port and the power/lock key occupy the top of the BlackBerry Q10.

The Lock key and the audio port at the top

The bottom houses the loudspeaker grille and the mouthpiece. It's an unusual position for a speaker but one that makes sure you doesn't get muffled when the phone's resting on its back.

The bottom has the loudspeaker and the mic pinhole

The 8 megapixel camera lens and a LED flash are the main attraction at the back.

The camera lens at the back

Removing the battery cover grants access to the hot-swappable microSD slot, while the micro SIM compartment is only reachable after you've taken out the battery.

The NFC module is integrated within the battery cover.

The BlackBerry Q10 scored a 56-hour endurance rating, which is quite impressive considering it just has a 2100 mAh battery to rely on. The small and energy-efficient Super AMOLED screen must be getting part of the credit for the solid performance. Find the complete breakdown here. 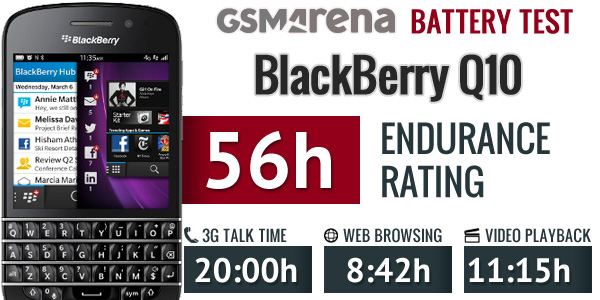 The BlackBerry Q10 uses a 3.1" Super AMOLED screen of 720p resolution (720 x 720 pixels). The pixel density clocks in at 328 ppi, which is slightly higher than the Galaxy SIII's screen and about the same as the iPhone 4S/5's Retina display.

Colors are punchy, blacks are the usual AMOLED deep and the screen is viewed comfortably at even wide angles.


Sunlight legibility is quite good too, as testified by the BlackBerry Q10's performance in our dedicated test.