There and back again

BlackBerry Q10 review: There and back again

Easy to use image gallery with powerful options

The image gallery app has a simple three-tab interface. The first is Recent and it displays recently added and recently viewed images (each list gets half of the screen, but you can tap the down arrow to expand them). The second tab is for photos shot with the BlackBerry Q10 and the third is for albums, which shows all folders with images on the device.

Multiple images can be selected at once for mass delete and mass share. There are also options to edit the image, start a slideshow or use DLNA to push images to a compatible TV.

Viewing individual images gives you the same options. You can move between images by swiping the current image past the edge left or right.

The Edit option in the gallery app is pretty powerful. The Transform tab in the editor can rotate and flip the image and there's a free transform tool as well if you want to crop out a specific part of the image. Then there's Enhance with the standard image tweaking options available (brightness, contrast, sharpness, noise reduction and so on), each with a slider for adjustments. There's a simple Auto-enhance option if you don't want to waste time.

The final two tabs are Artistic and Styles, which pretty much do the same thing - add Instagram-like effects to the image (everyone's favorite Lomo, Sepia and Aged photo effects). There's a cool animation that shows the effect sliding up on the image, giving you a one second look at how the current effect and the new one look side by side.

The video player is quite capable, the screen is not fit for video playback

The BlackBerry Q10 comes with a surprisingly capable video player. Its interface is very similar to that of the image gallery. It has three tabs - Recent, Camera and Library (which shows all video files in the phone storage) - and can display items either as a list or a grid.

Picking a video to watch

You can search for a video, mass delete videos, share them or push them through DLNA to a compatible player. There's also the HDMI port with which you can output the video to any HDTV, as long as you have a microHDMI cable (those are more popular and cheaper than MHL adapters).

The video handled all the popular file formats but MKV and 1080p videos easily. Codec support is pretty great too - DivX, XviD and h.264 are ready to go, as is Dolby Digital audio. The AC3 audio codec is a no-go, though.

Some competing smartphone don't support much else than MP4 videos with MP3/AAC audio, so this is good showing by the business phone. We do wish there was subtitle support though.

Trimming, cropping and adjusting a video with the editor

This isn't the only video editor on board the BlackBerry Q10 either. The Story Maker app lets you pick multiple movies and photos and puts together a video slideshow with a soundtrack of your choice. There are several different preset styles, which add an effect over the whole video (vintage, bleach pass, etc.).

By default, Story Maker saves the final videos in 720p resolution but you can switch to 1080p if you like.

The BlackBerry Q10 might be a powerful video tool, but its square and small screen, even though it's an AMOLED, is not suitable for enjoying video watching. You can surely use the fit to screen options, but you'll lose 1/3 of a 16:9 video. Still, the BlackBerry Q10 wasn't made for entertainment, so we can't consider this a major drawback.

Snappy music player with no equalizers

The UI of the BlackBerry Q10 music player is pretty similar to the image gallery and video player. It has three tabs, the first of which displays recently added and recently played music. The second organizes the music library by Artist, Album or Genre and the third one displays all the playlists.

The Now playing interface is pretty simple with a big album art in the middle, surrounded by playback controls (including shuffle and repeat buttons). If you tap on the album art (or drag it down) you get the current playlist so you can easily jump between songs (swiping left and right between songs doesn't work).

There are no playback controls on the lockscreen or the toggle dropdown a la Android, you can use the volume keys instead. The volume up and down buttons change the volume for short presses or act as previous/next buttons if you long press them. The middle button is play/pause.

The BlackBerry Q10 put up a great performance in our audio quality test, demonstrating a nicely clean output.

When you use the smartphone with an active external amplifier you get great scores all over the place. The frequency response was spot-on and there was no detectable distortion. The signal to noise ratio and the dynamic range are very good too and the only thing to disappoint was the below average volume level.

There is a pretty big increase in stereo crosstalk when you plug in a pair of headphones, but the good news is none of the other readings are affected. Volume levels remain average, but the overall performance is perfectly solid. 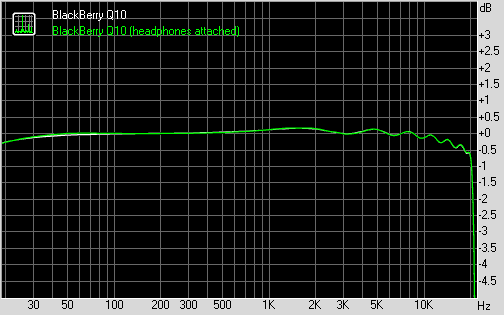