Smartphone makers believe in trickle-down economics. They build their portfolios top to bottom, looking to get as much bang out of the flagship as they can and, after the hype around it has settled, they bring out the more affordable packages to keep the cash rolling in. The big question - always - is how much of the flagship specs will trickle down the ranks.

Having delivered the latest BlackBerry 10 OS in a classic messenger form factor, a midrange package combining touchscreen with the iconic hardware keyboard was next on the Canadians' to-do list. The Q10 came at a price not a lot of people can afford, so the Q5 promises to deliver the same experience without sweeping the fluff out of your pocket. 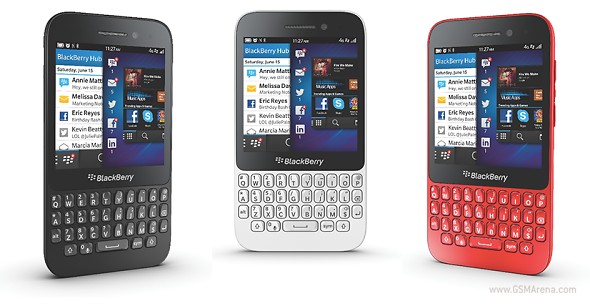 At first glance, the Q5 has all the important checkboxes ticked. You get a dual-core Krait chipset, a 3.1" display of the same 720 x 720 pixel resolution and a four-row QWERTY keyboard for that serious texting and emailing.

The screen is no longer AMOLED, the camera has been downgraded from 8MP to 5MP and the CPU has been downclocked by 300 MHz. These are things, which sure make the Q10 the more desirable package, but not the kind that will dramatically change the user experience. It looks like the BlackBerry Q5 is much closer to the BlackBerry Q10 than its name suggests.

BlackBerry Q5 at ours

That, and the more affordable price tag, may actually help the Q5 convince more users than its bigger and more advanced sibling. We are about to see how much of that potential translates in real-life performance. Join us on the next page, where the Q5 gets unboxed and handled.

Does the screen have glass or plastic cover?

Blackberry Q5 does not have LED coverage light ?